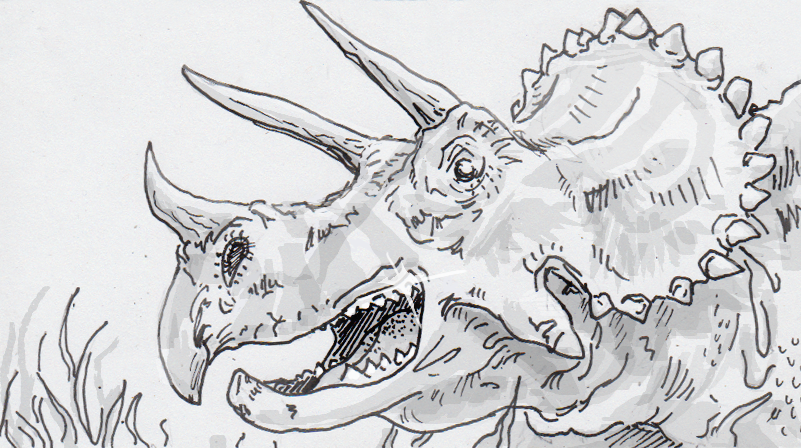 If you had to guess what made Triceratops a successful species in the late Cretaceous period, you’d probably first think of their famous horns and frill. But similar to the famous, serrated canines of a Tyrannosaur, the sophistication and effectiveness of Triceratops’ teeth may have been more critical to their proliferation than these more showy structures. Recent research shows that these complex teeth allowed for efficiency, durability and as a result, some dietary flexibility.

Previous reptiles and archosaurs were not well equipped for chewing, and so they basically skipped it. Most reptiles made due with cone or leaf-shaped teeth that could capture food and then break it up a bit before it was swallowed. The giant, long-necked sauropods, like Brachiosaurus, had to depend on gastroliths to make up for what their peg-shaped teeth couldn’t handle. Real chewing was an innovation, and herbivores approached it from various angles. Hadrosaurs had thousands of teeth and very complicated jaw movements. By comparison, Triceratops’ bite was slightly more simplified but clearly no less effective.

Central to Triceratops’ teeth were the five layers of tissue on each tooth. Most reptiles have two layers, while current record-holders like horses and bison top out at four, but this isn’t just a case of more layers being better. One layer, made of porous and therefore more delicate vasodentine, was concentrated on the inner, or tongue-facing side of each tooth. As this wore down with use, it left the tooth with a slightly concave shape on that side, which actually improved the tooth in a number of ways. It helped increase the amount of pressure that could be concentrated at the business-end of the tooth, without adding stress to the tooth, similar to a fuller in a knife or sword.

This hollow also moved some of the surface area away from the center of the mouth, so that that scalloped surface would have less contact with rough food, reducing wear and tear in the long run. Even the small reduction in friction when chewing would have made extended grazing a bit more energy efficient, which is good when you’re an animal that grows up to 12 tons in weight. And in case damage was done to these teeth, Triceratops had a stack of replacement teeth at the ready in the jaw, ensuring that they were always ready to eat.

These teeth also meant that Triceratops could have probably eaten a wide variety of plants, instead of needing to be picky and selecting just one or two favorite menu items (although there are advantages to that strategy to be considered). It could have then had more options when grazing, and been happy in a wider variety of environments than more delicate eaters.