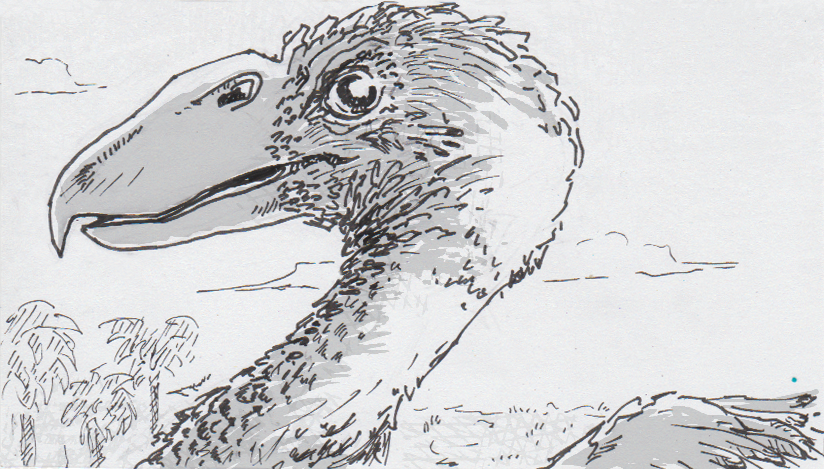 Llallawavis scagliai was not the most monstrous example of a terror bird. Estimated to have stood around 4’2″, it would have been a medium-sized phorusrhacid, but still one of the top predators in its Late Pliocene, South American ecosystem. But while it wasn’t breaking any records for size, this recently discovered specimen stands out for the amount of detail available in its unusually well preserved skeleton.

More data from the delicate details

The skeleton was found on the beach in eastern Argentina, and it was nearly 90% complete. While the bone count was impressive, the amount of delicate structures preserved may be the most critical aspect of this discovery. Softer or more fragile structures like the trachea, palate, ear canals and eye sockets were all preserved well enough to shape new predictions about how L. scagliai would have lived and functioned.

One of the first hypotheses to stem from the bird’s skull concerns their hearing. They seem to have been especially well attuned to low-pitched sounds, which may have implications for both their hunting behavior and communication.

As anyone who has had nosy down or upstairs neighbors knows, higher-pitched sounds don’t carry very far, especially with obstructions. However, lower-pitched sounds can be transmitted greater distances and through various solid materials. So just as you could hear the footfalls of your neighbors when you couldn’t hear their voices, this terror bird could likely have used his hearing to listen for the footsteps of possible prey.

This new specimen is likely to continue yielding new data as paleontologists continue to study it. The skull and beak have already been found to be particularly rigid, helping to flesh out our model for the bird’s quick-strike hunting methods. Beyond that, there is probably still more to be learned from the eye sockets, brain box and more to better understand just how this animal saw, heard and interacted with the world.