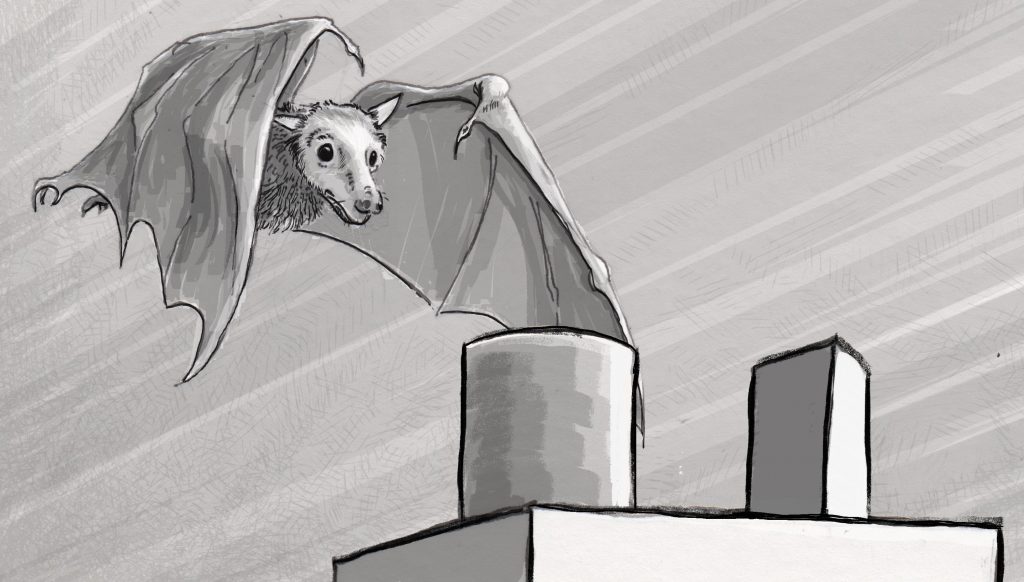 Bats aren’t one trick ponies. Well, obviously they’re not ponies, but while members of Chiroptera are probably most famous for their ability to navigate the world with echolocation, researchers have found that they experience the world blending multiple senses, sometimes even favoring their vision over their signature squeaks and clicks.

Searching with sound… or sight?

To test how much bats rely on different senses, researchers put together a series of tests for some Egyptian fruit bats (Rousettus aegyptiacus). These bats are known to have good eyesight and even though their meals are generally found attached to trees instead of flitting about in the sky, they can also navigate with echolocation. Their echolocation is slightly unusual for a bat though, as it utilizes clicks made with the bat’s mouth rather than squeaks from the larynx. This combination of strong eyes and dolphin-like clicks made Egyptian fruit bats a good test subject, as their echolocation would likely be more accurate only at shorter distances, which researchers hoped would make for distinct changes in the bat’s behavior when it used one sense or the other.

The first round of tests relied on training both senses though, so that researchers could then see how the bats would adapt once their vision or echolocation was disrupted in later rounds of tests. Bats were tasked to fly through an enclosure and land on either a cylinder or a prism-shaped object. Once each bat could consistently select the preferred object in a quiet, well-lit space, they were challenged to do it again with half their sensory information disabled.

When asked to fly in the dark, the bats’ success rate was surprisingly low. Three out of four bats couldn’t consistently find their target any longer, suggesting that they had learned to recognize the objects primarily through visual information when the lights had been on. To test the inverted scenario, the lights were on, but 30 kHz “pink noise” was played in the test space to overpower any echolocating clicks from the bat. Most bats could find their target without a hitch, although one participant was noted as having “refused to participate” in these conditions.

Finally, the bats were tested with both their vision and echolocation obscured to make sure some other sense, like smell, wasn’t actually guiding them to their targets. It appeared that the bats were finally “flying blind” in these conditions, with no participants achieving any consistent success. Taken all together, these tests suggested that these fruit bats relied on their eyes more than anything else if that information was available. Furthermore, information gleaned from echolocation seemed to help the bats find things they could later see, but previous visual information didn’t seem to improve their echolocation all that much.

Clicking away from collisions

This isn’t to say that the bats weren’t using their echolocation to navigate the world. A second set of tests tracked bats as they flew down a simple T-shaped maze that had one branch open, and one blocked off. After testing nearly 300 bats in various conditions, a pattern emerged that suggests the bats rely on different inputs different circumstances. Overall, the bats tried to fly towards darker, possibly more secure, spaces, but if those dark spaces proved to be a painted wall, the bats echolocation seemed to provide last-second information that would lead to evasive course corrections. In fact, when the dark wall was sound-absorbent foam, more bats collided with it as their echolocation failed describe the solid object in their path. So even if the bats’ eyes helped them pick which branch of the maze to take, their echolocation was providing updates on their course as they flew.

When to use which “mode” of observation

While researchers were slightly surprised at the visual bias the bats displayed in certain circumstances, these tests otherwise aligned with previous studies of “cross-modal” perception. It may seem intuitive that an animal would rely on primarily on its eyes to humans thanks to our species’ biases for visual information, but this couldn’t be assumed in a creature with the ability to echolocate. These tests also help identify the scenarios when one sense feels more reliable than another, which didn’t always align with what would be expected of a human.