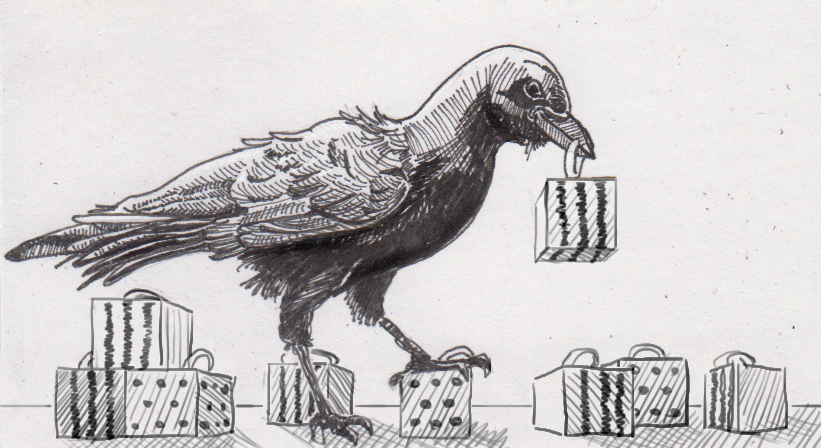 Do crows know how to play as well as humans do? That’s a question that put wild New Caledonian crows (Corvus moneduloides) and captive kea parrots (Nestor notabilis) in playrooms with various objects that were intended to be used as toys. The two species were selected for previously-known interests in objects, as the crows are known to use sticks and leaves to scoop up insects they want to eat, and the parrots have a hard time keeping their beak off any object the encounter. One key difference is the apparent intent of these activities- hooking insects is clearly useful, but picking at car tires doesn’t seem to help a kea parrot’s survival in any obvious way. That said, crows are known to spend time on tasks that seem to serve no purpose besides “fun,” but to avoid risking projecting a human perspective onto the birds’ motivations, this research set out to test some of these behaviors with toys.

The experiment had two physical puzzles for birds to attempt in order to earn tasty rewards. One required dropping a heavy block down a chute to knock it off a platform, revealing food, and the other needed the bird to take a stiff, slender object to poke food out of a tube. To focus on the birds’ understanding of the puzzle, each would be presented with some objects that were either heavy or stiff enough to succeed, and others that weren’t.

The birds weren’t expected to figure all this out at once though. Instead, individual parrots and crows were first put in an enclosure with the useful and useless objects, but not the puzzle itself. They all showed some interest in these toys, satisfying the experiment’s requirement that the birds become familiarized with each object. After playtime, the birds were moved to a space that had the food puzzles and an object that could be used to solve them. This way, the bird would only have a heavy block or straight stick to work with, theoretically learning how to solve the puzzle. Finally, after having time learn all the possible tools and tasks, the birds were placed in an enclosure that had both toys and puzzles at the same time so they could put it all together.

In this phase of the experiment, no crow or parrot made the association researchers hoped to see. They played with the toys again, but in the same ways they’d poked at them before being introduced to the puzzles. The toys were still just fun diversions (maybe too fun?) as far as the tangible outcomes were concerned. To see if any associations were made, the birds were then given a more focused challenge, reoriented to stop the birds from goofing off so much- pick either a heavy or light block to get the food. Choose either a slack or stiff rope.

Even then, the idea that toys should inform tools didn’t seem to be tied to tool use in the wild much at all. Out of 12 participants, only two kea parrots and two New Caledonian crows picked the correct objects. It seemed that experimenting with objects’ utility varied according to the individual bird, not a species-wide interest in tool use. However, this phase of the test did reveal that previous playtime did make a difference after all- birds that hadn’t already played with blocks and ropes made worse choices when prompted. The four successful birds, on the other hand, had had a chance to investigate the toys, presumably learning something about their physical properties.

It may seem unsatisfying that a tidy conclusion about avian engineering wasn’t revealed, but this does still help inform us about play and learning. It seems that the birds’ playtime is helping inform them about the world, but not about a specific strategy. Crows and parrots may not benefit directly, gaining food or mating privileges the moment they pick up a toy, but they do learn more about their environment, how it works, and what they’re capable of doing in that environment.

We’re pretty familiar with this process, since as babies we all explore and test the world around us, even if that means sticking objects in our mouths or dropping spoons on the floor over and over. This test hasn’t proven it, but it seems plausible that bird brains have similar reward circuits that we do for learning. They may be driven to play and explore not for immediate, extrinsic rewards like food from a tube, but because there is intrinsic satisfaction in figuring things out. In other words, playing probably feels fun to them, too.

Source: Scientists investigate why crows are so playful by Annalee Newitz, Ars Technica