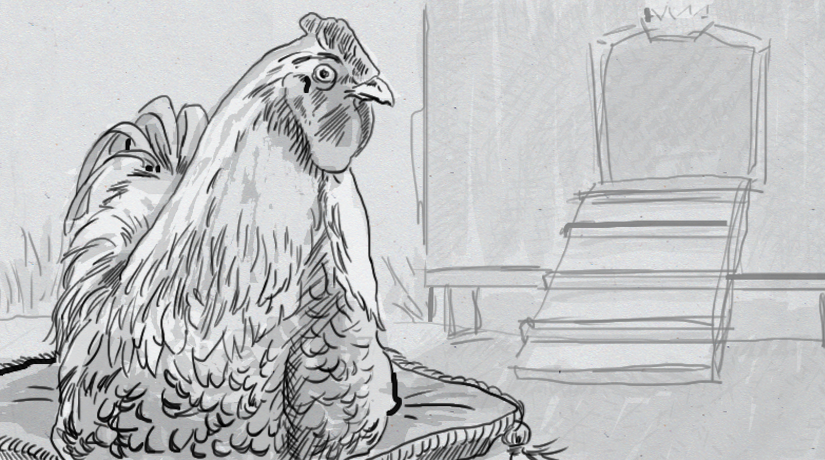 As much as we hate to admit it, celebrity endorsements can be powerful influences on our thinking. Do you own headphones at the suggestion of Dr. Dre? Andie MacDowell’s favorite face cream? Would you buy a chicken if it was recommended by the queen of England? While royalty aren’t known for their prowess as farmers, in 1842 Queen Victoria started what would become an international craze for fancy chickens, with only the promise that they were beautiful to look at.

The chickens in questions were Cochin chickens, known to the Queen as “Cochin China Fowl.” They’re striking birds, weighing up to a hefty 11 pounds and looking even larger thanks to their voluminous plumage. Males are multi-colored, with patches of saturated copper and black feathers that extend down to their feet. Long, iridescent tail feathers are the final touch on what’s a very eye-catching bird, especially for Europeans in the 1800s who had never seen such a thing before, much less been able to own one.

Queen Victoria was enamored with watching her seven chickens in their custom enclosure, and was inspired to grow her collection, and show it off to her peers. Since she lacked a convenient way to brag about her pets over the internet, she resorted to mailing eggs to her extended royal family across the Continent. Word spread to Europe’s upper classes that chickens were “in,” and soon everyone was clamoring for exotic fowl to show off to their peers.

Ornamental chicken breeding then spread to the United States. By 1845, Boston was hosting the first poultry show, with over 10,000 visitors and 219 exhibitors. More exhibitions followed as the professional class vied to have the most brag-worthy birds. While chickens had once been so insignificant that farmers would barely appraise them as part of their operations, doctors and lawyers drove prices of select breeds to the modern equivalent of $30 an egg and $3,600 for a pair of birds.

With Chochin Bantam chickens now selling for $4.19 each, it’s obvious that this fascination with chickens has subsided. The demand for fancy birds meant there were more and more birds being bred, and as a result eggs started becoming a more regular addition to American diets. By 1855, the fad was already in decline enough that the birds were turning up more on menus than at social engagements. The Chinese origins were still of interest though, so dishes like “fricasseed Shanghaes” or “curried Shanghai fowls” became common. Things have now reversed so far that some breeds are in danger of dying out. Time for Prince William to take an interest in birds?

Source: The Forgotten History of ‘Hen Fever’ by Emelyn Rude, The Plate