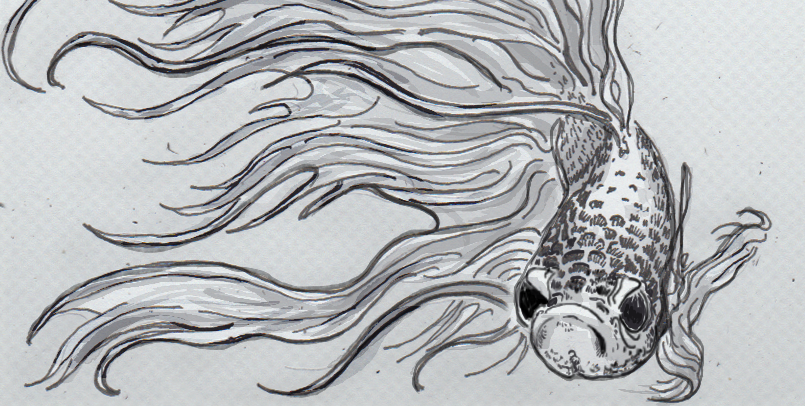 The beauty and belligerence of Betta fish

Humans took an interest in Betta fish over two hundred years ago, and have since bred them into colorful and flamboyant looking fish, popular in aquariums the around the world. Vibrant colors probably weren’t what caught people’s eye when they first started raising the fish in southeast Asia though. The initial allure was that Betta are also notoriously territorial, and gambling on the aggression of captive fish is what made the species Betta splendens become famous under the name Siamese fighting fish. Oh, that and they can breath out of the water.

Unyielding, even out of water

B. splendens come from a relatively rough part of town, as far as fish habitats go. The rice paddies and drainage ditches they called home were not exactly stable environments, as they were subject to cycles of flooding and droughts. Perhaps this unpredictable scarcity helped shape their touchy personalities, but a clearer connection is to their labyrinth organs. Betta, as well as other fish in the suborder Anabantoidei, develop their labyrinth organ as they mature. This organ isn’t quite lungs, but the thoroughly-folded portion of the fishes’ first gill arch allows them to pull oxygen from air, in addition to using their gills in the water. As long as a labyrinth fish like the Betta stays moist, it can breath air for over an hour, which probably bought the species time to find water if a storm otherwise left them high and dry.

This environmental flexibility didn’t really carry over to the fish’s social lives, which is why people started gambling on their disposition. Males need plenty of room in a shared space to stake out their own territory, and even females will be aggressive with each other until a hierarchy is established. Since males will even attack their own image in a mirror, putting two fish in the same, small space is a recipe for a lot of posturing and nipped fins. The injuries involved were secondary to ancient gamblers though, who were primarily wagering on which fish would back down first, not achieve an actual kill. This means that fighting fish were not always in a battle for their lives, but if left unchecked the fish could certainly pose a real risk to each other. Just ask their kids.

In mixed company, the fish start out with a bit more civility. The male fish will create a nest out of bubbles on the water’s surface, and then court a female with flashier than normal coloration, hoping she’ll respond with some sexy “breeding bars,” aka, vertical striping. He will then wrap his body and tail around her in an “embrace,” inducing the female to eject her eggs into the water. The male then captures the eggs, fertilizing them and tucking them safely into the waiting bubble nest. He has to hurry, since he’s actually competing with the female at this point, who will eat any eggs left drifting in the water. Once all the eggs are accounted for, one way or the other, the male will chase the female away, or possibly even kill her while he starts his watch for a day or two while the eggs gestate.

While the male will watch over the eggs, once the young are born they’re on their own. Presumably the dad doesn’t want to wait until he’s got a brood of surly teenage children on his hands, all looking to pick his fins apart.

My first grader asked: Why does their food smell so bad?

We were fish-sitting a neighbor’s Betta this weekend, and the freeze-dried food is made of dried bloodworms, brine shrimp and added vitamins and minerals to make a complete, but understandably stinky, breakfast, lunch or dinner.