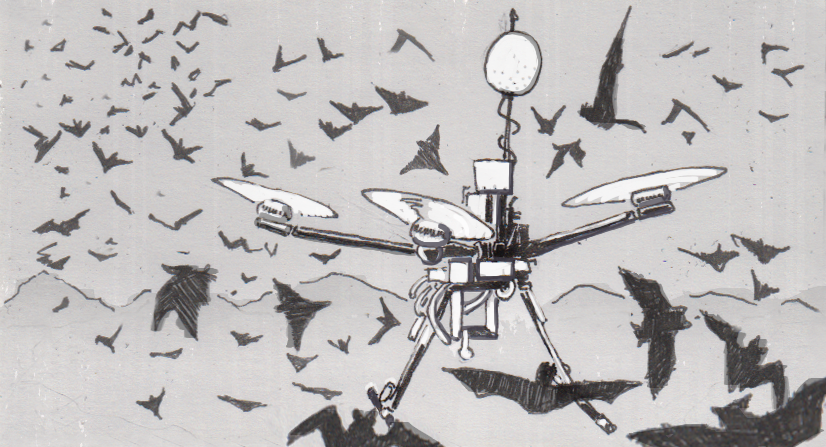 Bats are some of the most advanced aerialists on the planet, but they’re hard to observe in the wild. Between flying in the dark and navigating with ultrasonic sounds human ears can’t hear, it’s difficult to make observations about how bats conduct themselves without the help of technology. For a long time, that’s been done with microphones and cameras on fixed towers, although that limits the distance and viewing angles from which researchers could gather data. Now with a modified quadcopter, nicknamed the Chirocopter, biologists can gather much more dynamic, detailed data on bat behavior from within the moving center of colony of flying bats.

Observing from the air

The Chirocopter gets its name from bats’ scientific order Chiroptera, although the device doesn’t bear much resemblance to the animals it’s meant to study. Like other bat observation posts, the drone carries thermal imaging cameras and microphones to listen in on bat’s high-pitched vocalizations. The major advantage is that Chirocopter’s mobility allows it to position these tools in much closer to proximity to the animal’s its observing, allowing researchers to more easily match specific echolocation vocalizations to activity seen on the camera. This should allow them to start to ‘decode’ when a bat uses a certain squeak, and how it then uses that information to plot its trajectory, somehow avoiding collisions with the thousands of swarming animals flying around it.

Of course, Chirocopter’s four propellers aren’t exactly silent either. To avoid overwhelming their recordings with sounds of the buzzing motors, or reflecting the bats’ echolocation, Chirocopter’s microphone was housed in large, Styrofoam ball, which acted as a lightweight but effective insulator. Overall, Chirocopter was likely quite conspicuous to the bats it observed on its initial test runs, but that probably helped avoid any collisions between the flying mammals and the drone.

Chirocopter’s first tests were just outside a cave in New Mexico, recording 84 minutes of activity from a colony of Brazilian free-tailed bats. At heights ranging from 16 to 160 feet above the ground, the drone recorded 3,847 echolocation signals, or around 46 chirps per minute. When comparing that activity to what was seen on the quadcopter’s camera, researchers realized that bats were sometimes diving at speeds of up to 62 miles-per-hour.

The success of Chirocopter is suggesting a number of paths for further development. Once the methods of the bats’ flight are better understood, that data may help inform how we program future drones to fly and maneuver without collisions. In the more immediate future, researchers are looking to expand where Chirocopter will be used, such as near wind turbines that may be a health hazard for bats in flight. Chirocopter’s microphones may also be altered to target other ranges of sound, making the device useful for tracking other animals’ vocalizations, although that would also require a new name, of course.

Source: With “Chirocopter” Bat-Detecting Drone, Scientists Are No Longer In The Dark by Sarah Whittaker, Drone Below