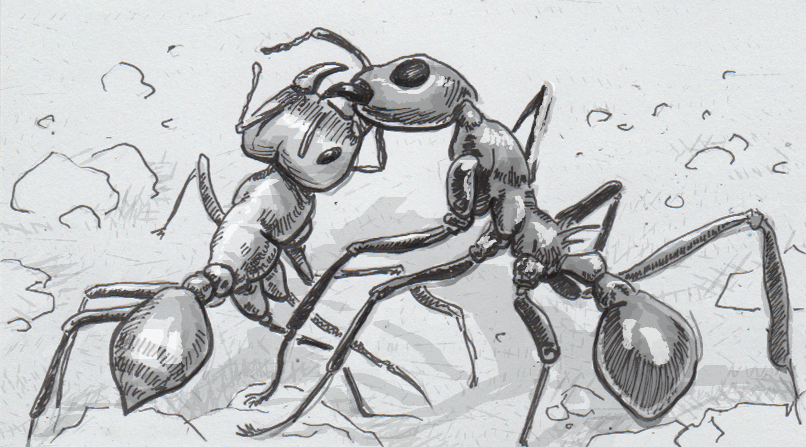 The clashes and combat of antagonistic ants

Today my first grader and her friends may have inadvertently intervened in a war. Most of the other kids on the playground wouldn’t notice any serious threats of course, because the battle was between two competing ant colonies. The details were a bit sketchy, as the fighters were described as either the “black ants” and the “red ant,” but the behavior the kids witnessed indicates that by removing the red ant from the fight, it’s life may have been saved. At least temporarily.

When the kids found the fighting insects, there was no visible bloodshed, and so they weren’t sure what they were seeing. It looked a bit like the ants were merely tangling their antennae together, but this seemed distressing enough that the girls chose to intervene. What the kids didn’t see was that the ants were likely tugging on each other with their mandibles, the strong, clamp-like mouth parts that can also be used carry food and other objects heavier than the ant itself. Often, ants will latch on to enemies as a group, then engage in what may start as a tug of war, but as reinforcements arrive becomes drawing and quartering.

If dismembering one’s enemies wasn’t enough, some species of ant have additional weapons in their armories. Some species, like Asian needle ants (Brachyponera chinensis), are capable of stinging with a wasp-like stinger at the end of their abdomen. These stings are usually reserved for other insects, but species like Paraponera clavata, also known as the “Bullet ant” packs such a punch the pain is compared to being shot by a gun. Some ants have even more modified stingers, built to spray things like formic acid or piperidine, rather than inject toxins. Not all ant conflicts lead to fatalities though— the honeypot ant Myrmecocystus mimicus will battle rivals through intimidation and display fights, all without harming their opponents. This doesn’t mean the stakes are any lower though, as the losing colony will then be raided and enslaved as food carriers.

My first grader’s intervention ended when the kids moved the slightly outnumbered red ant back to a tree where they’d seen more of its kind. Hopefully that was truly the ant’s home, as being a member of the same species doesn’t earn an ant any protection if it’s from the wrong colony. If it was home, the battle will still likely be continued on other fronts, as territorial conflicts can carry on for years as long as no clear victor, or curious kids, dominate the conflict.