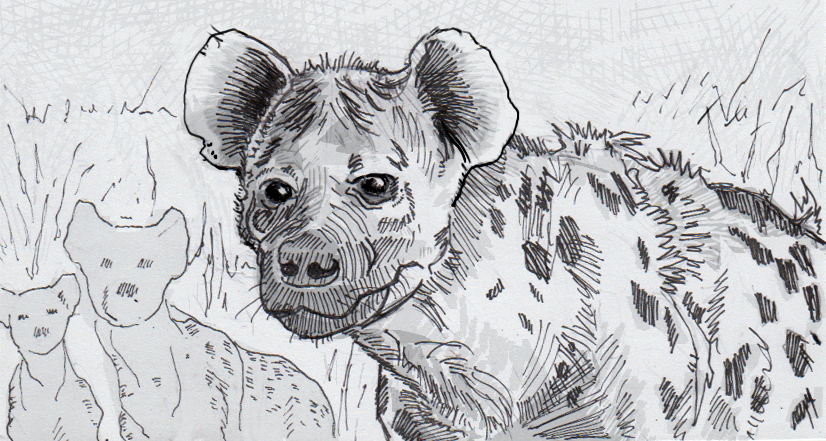 The clear and orderly society of 100 spotted hyenas

How would you organize a group of hyenas so large it’s called a “clan?” On a macro scale, it’s a tough, sometimes brutal affair based on strict hierarchies. But smaller groups are based much more on social interactions, and the friendships between individual hyenas act as the glue for the group.

A clan of hyenas can have up to 100 members, which is an unusual congregation for a predatory species. They operate on a hierarchy largely determined by the outcome of fights between members, with winners at the top of the heap and losers at the bottom. One caveat to that rule is that, like a good monarchy, pups inherit rank from their mother from birth, and have all the rights of dominance she does, such as demanding to eat a kill before lower-ranked members of the clan.

Males need not apply in this matriarchy

The rules change for adult males though, as hyenas are a matriarchy. Only female hyenas can actually fight for rankings, and once males reach two to six years old, they’re expected to leave their birth clan to join another, where they’ll have a chance to mate. Males joining a clan are automatically at the bottom of the heap, and will never be able to become equal to even the lowest female.

A circle of friends with more help on the way

So how does this tiered society function? Despite the clear pecking order, the whole clan doesn’t try to move as a single unit too often. Instead, the hyenas operate mostly as smaller, socially-grounded groups, where the “friends of friends” principal helps individuals form and maintain bonds with each other. When a scenario does come up that needs a larger group’s attention, such as a territory dispute, or fighting off lions, a special vocalization will be made to rally for backup. Once the threat has passed, the clan can disperse again into its smaller sub-groups.