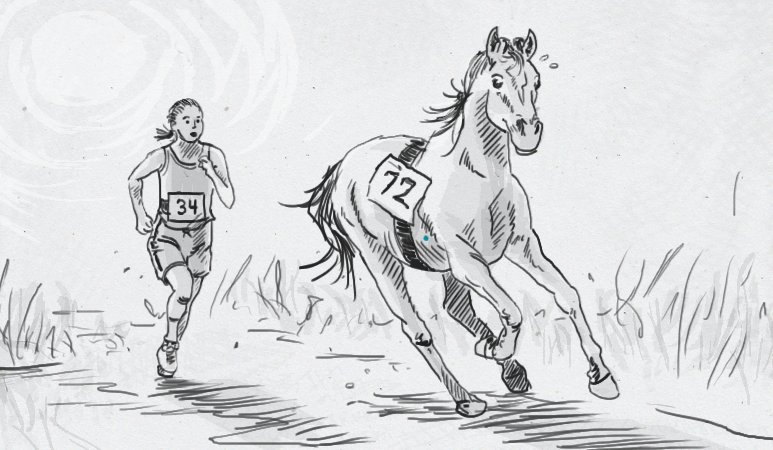 The critical advantages of being a bald and sweaty biped

Could you outrun a horse? In the short term, probably not. A human’s top recorded sprint was 27.8 mph, which isn’t going to impress the fastest horse, who hit 55 mph for a short sprint. Your best hope would be to keep the race going long enough that you have time to make use of our body’s secret weapon: sweaty, bald skin.

Making up for having two fewer legs

As upright primates, humans have a number of unusual pieces of conformation. Sure, we’re kind of top-heavy, with large heads on stressed backs and necks. But our inner ears help our two-legged balancing act. Our large butt muscles stabilize our core, and elastic tendons help make our run more efficient. Our biggest boost, however, is our relatively hairless body and ability to sweat.

When on a long run, we usually worry more about running out of breath than overheating, but this isn’t true of many quadrupeds. While an antelope can sprint at amazing speeds, they need to pant to cool down, and when they’re running, their organs are smushing their lungs against their ribs too much to do that. So that great sprint needs to stop periodically so that they can control their temperature.

Humans, on the other hand, can gasp and pant, but more importantly sweat enough to keep our temperature down without a break. This continuous running may have evolved to help our ancestors hunt. Rather than chase prey down in a sprint, they could slowly wear an animal down, and then catch it when it needed to stop to cool off.

These days we’re obviously not running a lot of cows down to eat. But humans have been conducting foot races against others on horseback for the last 35 years in the Man v. Horse Marathon in Wales. The humans get a 15 minute lead, although that’s accounted for in the final time comparisons. The rugged, 22-mile trail acts as an equalizer, with the outcome of the race being often correlating with the weather on race day. Hot races are predictably better for human runners, but cool weather, such as during this year’s race, favors the horses as it helps them make up that cooling deficit. Of course, horses do sweat, but presumably not as efficiently as we do, especially when coupled with our body’s lower skin to volume ratio and lack of hair.

So if you ever need to outrun a horse, just remember to keep going and you’ll pass it eventually.

Source: The Neighs Have It: Horse Outruns Man, But Just Barely by Adam Cole, Shots