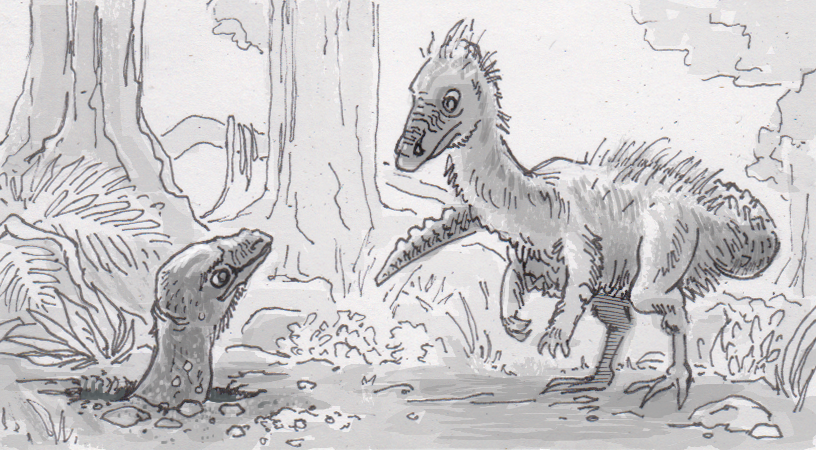 Sometimes the fossil that makes sense of a long extinct species isn’t a bone at all. This was the case with Oryctodromeus and it’s relative, Orodromeus. The strange dinosaurs found in Idaho and Montana just didn’t seem to add up when scientists first found them. Their anatomy was a confusing mish-mash of large and small proportions, with oversized shoulders and oddly robust hips. Once they could finally be placed in the proper context, these strange theropods suddenly made sense as the world’s only known burrowing dinosaurs.

One of the first discoveries of Orodromeus was understandably misleading. Researchers had thought they’d discovered a nest, complete with eggs and the strangely proportioned skeleton of the yet-unnamed species. Careful study discovered that this site was somewhat of a red herring though, as the eggs were from a larger Troodon, meaning the Orodromeus skeleton was probably the there as leftovers from the predator’s lunch

The eight-foot-long dinosaurs kept turning up in Idaho, which was also unusual, as the environment in that area 75 million years ago didn’t have much of the soft sand and silt that is better at fossilizing remains. Nonetheless, Oryctodromcus and Orodromeus remains were being found in multi-aged groups, suggesting that they lived in some kind of family unit, not unlike modern rabbits or prairie dogs. Hmm…

Answers in the shape of the sand and silt

The key that finally unlocked the puzzle wasn’t exactly a Oryctodromcus skeleton, but the solidified sand around it. Adults and two juvenile dinosaurs were found in what was clearly a filled-in burrow. The burrow was around six-and-a-half feet long, and sophisticated enough to include two 90 degree bends towards its center. Once researchers understood the space where these specimens had been buried, the dinosaur’s anatomy all started to make sense. These animals needed strong arms and shoulders to claw at the earth, with robust hips to help provide leverage in tight spaces. This also explained their abundance in Idaho, as they’d most likely been buried in holes that they themselves dug, increasing the odds of fossilization in a place where most creatures weren’t preserved.

While hindsight may be 20/20, it’s understandable that these Oryctodromcus‘ digging would have been hard to recognize. No other dinosaur was known to dig burrows up to that point, and so this kind of behavior simply wasn’t expected by anyone. Since that time, a species from South Korea, Koreanosaurus, has turned up as another potential burrowing dinosaur. Burrows from the early Cretaceous period have also been found in Australia, but in those cases no occupants were found at that site. Apparently burrowing wasn’t the most popular lifestyle for a dinosaur, but at this point it’s hard to say for sure how widespread digging one’s own hoe really was around the world.

Source: The dinosaurs that dug their own grave by Pete Buchholz, Earth Archives