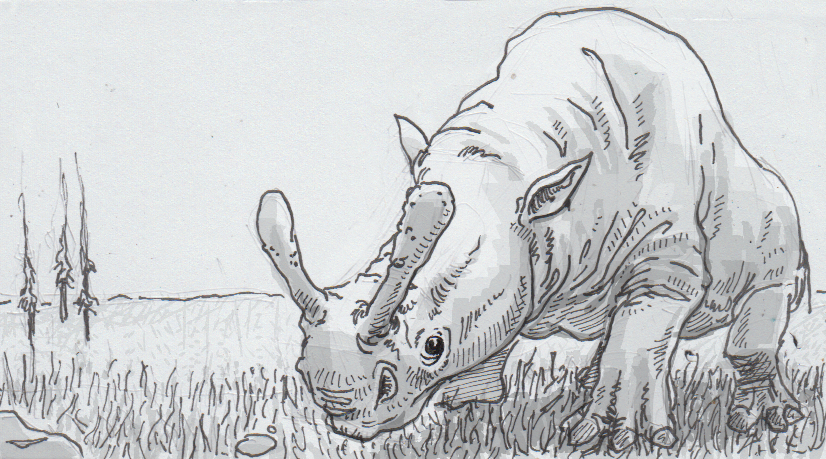 As much as a rhino’s horns help it stand out from a crowd, they haven’t always had such a monopoly on snout-based protrusions. 56 million years ago, in the Eocene period, there was some stiff competition in the barrel-bodied, odd-toed mammal scene in the form of Brontotheres. Like rhinos, early Brontotheres didn’t all have horned noses, but once they evolved they made their surviving brethren seem rather conservative in comparison. Between the Asian and North American species, Brontothere anatomy had some fascinating variations, most of which was all crammed into their skulls.

Horns and other headgear

One of the headlining Brontotheres was Megacerops, who sported a long head with its face squished up by the nose. The shape almost resembled a ceratopsid’s frill, but it seems to have been flush to the thick neck and body. Over the eyes and nostrils at the front of its face, Megacerops had a distinct horn in the shape of a lumpy “V,” sometimes compared to a mount for a sling-shot. The herbivore grew up to 16 feet long, standing 8.2 feet tall at the shoulder, with much of that shoulder height used as attachment points to help carry the large, heavy head.

A slightly smaller relative from Asia was Embolotherium, who’s head almost looked scooped out around the neck, with a paddle-like horn rising off of its nose. Though mostly flat, this creature’s bony process was supported by a ridge running down the center. While this may indicate that Embolotherium was ready to dish out a paddlin’ or two, the growth was also connected to a long nasal passage running the length of the animal’s head. This doesn’t necessarily preclude fighting, but this configuration suggests that the horn was also a resonator, allowing Embolotherium to make loud trumpeting calls, a bit like a Parasurolophus‘ crest.

Like many modern herbivores, Brontotheres probably lived in herds. The possible trumpeting of Embolotherium and the sexually dimorphic horns that may have been used in mating competition both speak to some kind of social communication among relations. Figuring out who those relations was is still an open question though, as for all the similarities to other perissodactyls, or odd-toed ungulates like rhinos, we don’t know where Brontotheres fit in the larger family tree. They don’t even strictly conform to perissodactyls, as their font legs actually had four toes, like artiodactyls (even-toed ungulates, including deer and giraffes.) If only we had some surviving relative, only to let us gawk at their noses more.