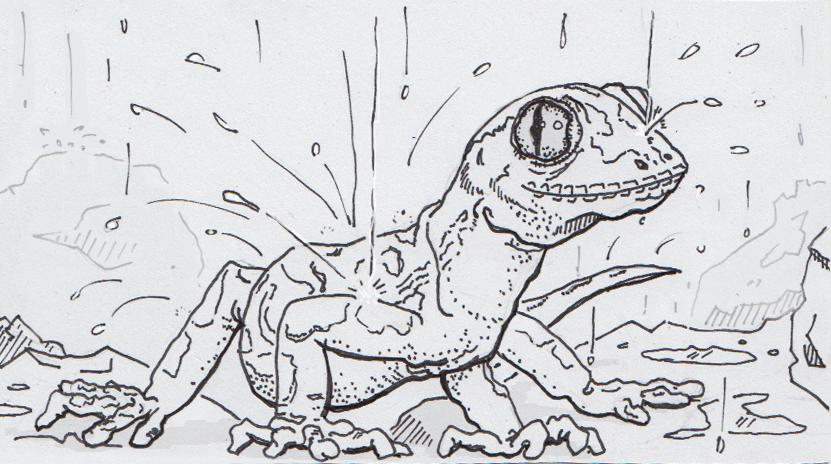 The gecko with the built-in blow-dryer

The Box-Patterned Gecko will never understand towels. This isn’t because they live in the arid deserts of Australia where there is little moisture to speak of. It’s not even because they’re small geckos who never encounter terry-cloth in their natural habitat. It’s because the surface of their skin is structured in a way that it cannot possibly remain wet.

Taking the term ‘hydrophobic’ to the extremes, this small gecko’s skin can actually induce water to leap off its body. Each scale is shaped like a small dome, covered in hairs so tiny that “thousands of them would fit in the cross-section of a single human hair.”

Now, human hair is known to actually trap water, drying much slower than our bare skin. The hairs on the gecko are the opposite. They’re packed so tightly together that they instead trap air between them, preventing the water from even being able to reach the animal’s body. The droplet of water is left to roll over this layer of hair-and-air insulation, until it comes in contact with another drop. That’s when the hydro-aeronautics start.

So why would a desert-dwelling reptile benefit from repelling water? It turns out that the morning dew or occasional fog is a concern as it may lead to the growth of microbes or fungus on the gecko’s skin. As the water removes itself from the gecko’s body, it can also take other contaminants with it, keeping the box-patterned gecko dry and clean. And as a bit of speculation on my part, the air pockets probably provide a bit of thermal insulation as well, similar to the hair or feathers on animals in colder climates.