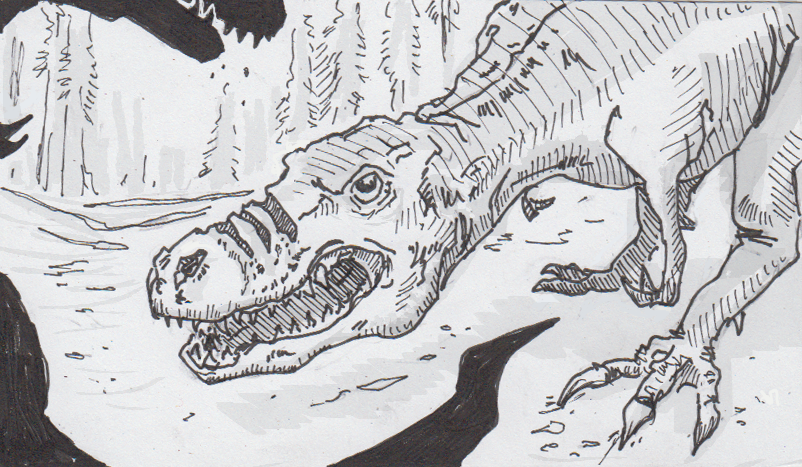 The life and afterlife of a Daspletosaurus

A single fossil can tell you a lot. Anatomical features like teeth and jaw size can tell you about an animal’s diet. The olfactory and eye sockets can inform you about how the animal got around and found food. But a fossil can also tell you about that individual animal’s life and experiences. From that point of view, a recently found tyrannosaur skull has some rough tales to tell.

The skull in question belonged to a Daspletosaurus. Daspletosaurus could grow up to 30 feet long, weighing as much as 4 tons. As such, they were one of the largest predators in their neck of the Late Cretaceous Period, with the only possible rivals being the contemporaneous Gorgosaurus, or, as based on the marks on this specimen’s head, other daspletosaurs.

Story of the scars

Marks may not be the best term to use, since what was found on this skull were most likely gouges from an attackers teeth. The various punctures and breaks go across the top of the animal’s head, which, when coupled with the lack of matching wounds on the body, start to look less like predation and more like a good ol’ tyrannosaur fight. We don’t know if it was over territory, mating preference or a display of dominance, but we do know that this individual managed to do well enough to walk away from the fight, as the bite marks show signs of healing.

Nobody lives forever, of course, and while this Daspletosaurus was no exception to that, his skull does have a story to share from after his or her death. Further tyrannosaur tooth marks, missing pieces of jaw and a lack of healing indicators show that this animal’s corpse was snacked on by a relative. The timeline is reinforced by teeth that aren’t damaged but fell out of their sockets, indicating that this carcass had spent some time decomposing before someone decided to sample it. It also indicates that perhaps some of the choicer meat had already been eaten, because who wants to chew on a jawbone when there are drumsticks still available?

So while it’s great to discover new bones that tell of an animal’s existence, sometimes there’s a much richer story when those bones are marked by the animal’s experiences as well.