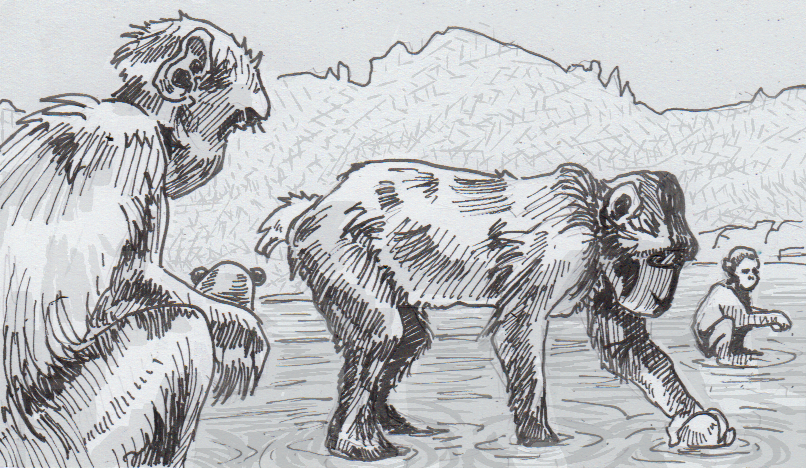 The monkeys who scrub their food before each meal

Despite the coaching he receives from his parents on the matter, my two-year-old son seems to already have his own code about when food is or is not too dirty to eat. Some items dropped on the kitchen floor get scooped back up into his mouth before we can tell him to stop. Other items, like a piece of popsicle on the porch, are more often abandoned after a sad, mournful moment of silence over the lost dessert. New research on macaques monkeys in Japan suggests that this internal balancing of gross-versus-tasty isn’t actually unique to my son, or even humans, as the monkeys will not only size up the potential yuckiness of found food, but they’ll make great efforts to clean items off whenever they can.

In general, the macaques are pretty tidy animals. They spend much of their day grooming themselves and each other, which helps the group build relationships as well. At meal time, some macaques are often observed taking extra time to take their food, like a sweet potato, down to the beach to wash dirt off it in the water. If that’s not an option, they’ll thoroughly wipe the food with their hands before taking a bite. The female monkeys are more likely to be cautious eaters, and that may be paying off for them- monkeys that washed their food had significantly lower amounts of parasites in their digestive tracts, leaving more of the calories from each meal for them (and theoretically, their young).

Peanuts worth the poo?

Other species have been seen cleaning their food, but in this case researchers wanted to test the monkeys’ behavior to really confirm what was driving this behavior. To do this, they purposely set up a scenario pitting the monkeys’ sense of disgust against their desire for nutrient-rich food. Fake and real poop was set out with either pieces of wheat or more enticing peanuts placed on top. The monkeys barely considered the wheat on either real or fake poo, as apparently a low-calorie snack like that wasn’t worth the trouble to even wash, much less eat. The peanuts, on the other hand, made the cut, and multiple monkeys were willing to risk possible parasites for such tasty food. This fits the modal that the macaques sense of cleanliness is driven by their desire to make the most of each meal while minimizing hazards.

While being clean with one’s food may go back to a common primate ancestor, it’s not totally clear that it’s something in our genes. Not every macaque bothered to wash up to the same degree, and there’s a chance that this has a cultural component to it as well. Which means it may be worth the trouble to keep nagging my kids about eating off the floor.