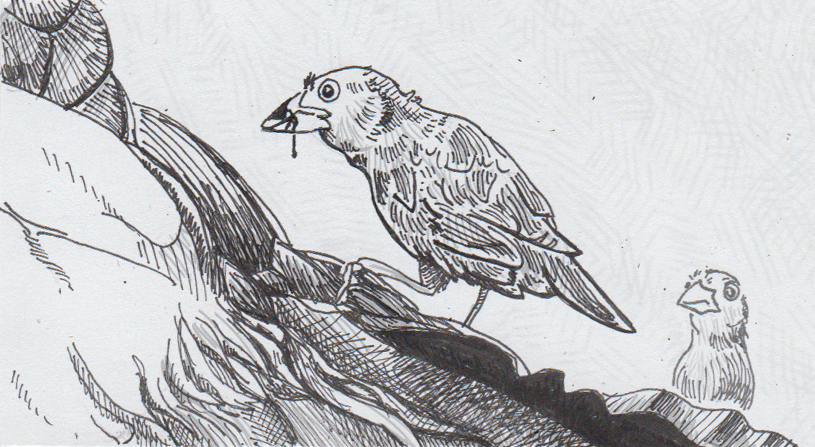 The most vicious vampires are feathered, not fanged

Evolution has given parasitic animals like mosquitoes and vampire bats delicate, precise tools to find their meals. When they draw blood, their victim will likely not feel the actual breaking of the skin, thanks to their needle-like proboscis or fangs. Newcomers to hematophagy, like vampire finches and oxpeckers, don’t seem to be well equipped. This isn’t a problem for the birds themselves, but the animals they dine on almost certainly wish they could employ a bit more subtly when getting a snack.

The vampire finch (Geospiza difficilis) is only found in the Galapagos Islands. The geographic isolation has pushed finches to a variety of extremes, changing their beak shapes, demanding the use of basic tools, or hacking at their neighbors to draw their blood. The vampire finches generally prey upon larger seabirds, pecking and jabbing at their backs until a bloody wound is made. Once the prey is bleeding, the there’s often a gruesome frenzy among other finches who scramble over to catch some of the dripping delectables.

The seabirds seem to somehow tolerate this, possibly because they’re their to incubate their eggs, and don’t want to move for fear of leaving their nest unattended. While the finches beaks are just sharp enough for crudely punching through another bird’s skin, they can’t handle the eggshells of something like a booby. Rather than cede any of their bloodthirsty reputation, the finches will push unguarded eggs over ledges so they break open, allowing for yet another sloppy meal.

Taking much more than ticks

Oxpeckers a are bit more passive-aggressive than vampire finches, but their prey suffers all the same. While they’re often described as mutualistic animals, only eating ticks and flies off the large mammals they ride around on, they may be acting as parasites themselves. They don’t seem to mind eating a tick off an ox, but once an animal has a break in the skin, the birds don’t seem to hesitate eating from that wound themselves. A survey found that oxen with the birds didn’t seem to have any fewer insects on them, but they did have a number of wounds that were festering and open, indicating the birds are living up to their name, pecking away at the oxen directly.

Even if the oxpeckers aren’t opening new wounds, by not allowing them to heal they leave their host open to infection. Like the vampire finches, their beaks aren’t exactly delicate instruments, and so the repeated nibbling alone continually damaging the host. While both oxpeckers and mosquitoes are technically eating their hosts alive, at least the insect has had time to evolve anesthetizing saliva.