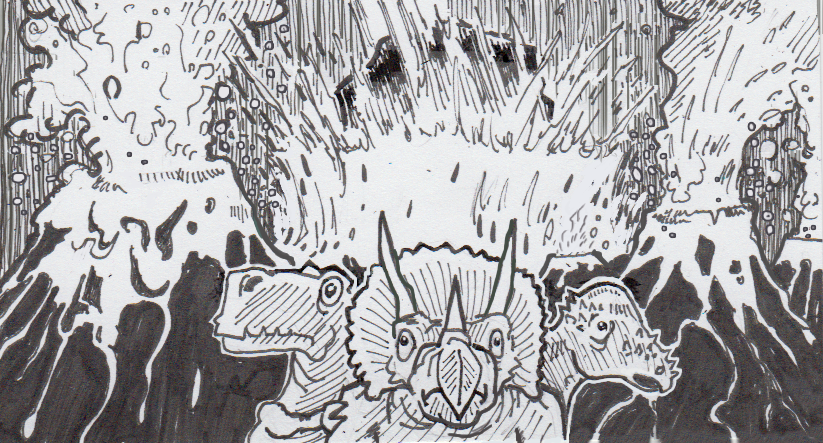 The multi-faceted misfortunes of the Mesozoic’s mass extinction

66 million years ago, the dinosaurs went out with a bang. And apparently some rumbling. And explosions. And drowning, and poisoning, and eventual starvation. But not firestorms, at least, as those have been mostly ruled out. While it may seem like these ancient creatures had everything but the kitchen sink thrown at them, it appears that the extinction of non-avian dinosaurs was the result of a trifecta of problems: a dip in biodiversity, an asteroid or comet strike, and then up to 500,000 years of volcanic eruptions.

The first concern is probably the least flashy. Steve Brusatte of Edinburgh University is looking at the idea that dinosaurs were suffering from a lack of biodiversity around 66 million years ago, right before the famous extinction event. On it’s own, this wouldn’t really matter, but homogeneous populations are potentially more fragile than those with a wider array of speciation. Shifts in the food web may not favor the dominant species, but others might not be ready to pick up the slack and keep the ecosystem from falling apart. This would be especially true in an environment that changed suddenly, such as when an asteroid hits the Earth with the force of a billion nuclear bombs.

Annihilation by asteroid (or comet!)

The 110-mile-wide crater at Chicxulub, Mexico is just one scar left from the comet or asteroid that hit the Earth 66 million years ago. The object was likely six miles across, and exploded on impact with enough force to leave a layer of debris across the entire globe. The impact also would have triggered seismic activity, including magnitude-11 earthquakes, tsunamis and maybe most importantly, volcanic eruptions.

There was plenty of volcanic activity in the late Cretaceous period, with some hot spots like the Deccan Traps in what is now India. Massive collections of volcanic rock speak to  massive eruptions, but new research indicates that, within a 50,000 year window, the asteroid that hit at Chicxulub may have exacerbated this volcanic activity, even on the other side of the world. The huge earthquakes that followed the impact may have disrupted and shifted the network of lava tubes and tectonic plates around the world in a sort of chain reaction, leading to increased output from volcanoes.

While magma is obviously dangerous, the real threat to life was in the air. Smoke and debris from the asteroid impact and volcanic eruptions would have been hard for plant life to cope with. Continuous eruptions would have then added sulphur dioxide and carbon dioxide to the atmosphere, shifting global temperatures and further stressing flora. Animals that weren’t poisoned by all this would have then had to battle the collapsing ecosystem as food sources ran scarce, especially for the larger, non-avian species that required large amounts of food to subsist on.

Fortunately, after half-a-million years, this apocalypse seemed to calm down. Volcanoes, like those in India, calmed and organisms seemed to begin to rise again, eventually leading to the rise of mammals. Let’s just hope we never have a chance to directly observe this theory in action.

My first grader said: Wow, it was like the dinosaurs’ grand finale! She then started inventing even more catastrophic scenarios, such as if the asteroid was “waiting” for just the right moment to hit. And if it was also carrying extra magma inside. And if…

Well, at least she wasn’t scared.