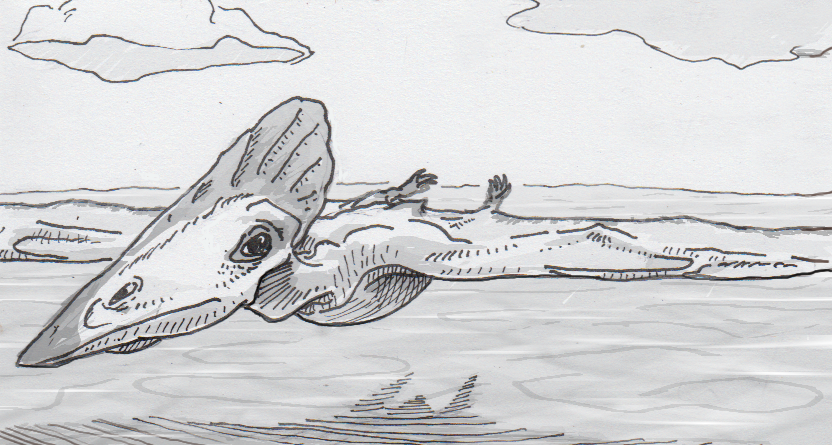 A convenient aspect of evolution is that you can usually look at something as part of a progression or sequence. Patterns seen in related plants or animals can provide a starting point when studying a new species. For example, you can look at quadrupeds the world over and compare forelimbs of many creatures and see how limbs ending in digits are the underlying template of many toes, fingers, and even flippers. Pterosaurs, however, have thrown us for a bit of a loop with what seems to be a brand new bone, throwing our usual body-plan references out the window. Further confounding things is that, unlike some other lineages from the Mesozoic, pterosaurs have no surviving descendants to compare against either.

The bone in question is called the pteroid. It was located somewhere on the front of pterosaur wing. The other bones are understood to be specialized wrist and fingers from which the bulk of the wing membrane was attached. The assumption is that the pteroid was then an attachment point on the front of the wing that may have provided a bit of reinforcement and extra control as the pterosaur wiggled it. The questions surround just how it was attached. Did it stick straight out from the wing? Or did it point from the wing back toward the body, more parallel to the rest of the wing bones?

Fossils are not a snapshot of life

While fossilized pteroids have been found more or less in place along wings, orientation is a trickier detail because fossils are almost always jumbled about by the time we find them. This disruption to an animal’s skeleton can happen right after death, thanks to being moved by water, gravity or other animals who want to eat the body. Shifts in geology can also obfuscate a skeleton’s layout if given enough time.  Even the process of decomposing can be disruptive, as different tissues slacken and rot at different rates, moving the body around. This means that even the best preserved skeletons shouldn’t necessarily be trusted to tell us just how such a small bone sat on these creatures’ wings.

Looking from fossils to physics

So one way this can be studied without perfect specimens is to reverse engineer the wing with computer simulations. It’s been found that a pteroid pointing forwards would increase the amount of surface area of the wing enough to measurably increase the amount of lift they could generate. The drawback to this is that that orientation was also found to put much more stress on the bone and related membrane. The membrane would then need to be very flexible, making it a poor material for the leading edge of the wing. An inward facing pteroid, however, was found create a stable leading edge to the wing without adding stress. It also seems to be a better match for a wide variety of pterosaur wings found thus far, and is thus the more attractive answer at this point.