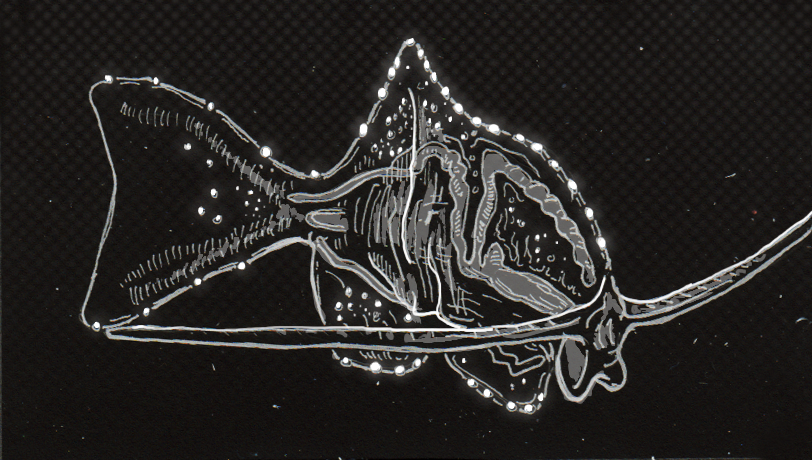 The swift slug that swims the open seas

What has a tail for swimming, lives in the sea and eats jellyfish? While glowing? That’s right! It’s obviously a slug! The nudibranch Phylliroe may be the most complete case of convergent evolution out there, having adopted not only a fish’s locomotion but even a convincingly fishy profile. If it weren’t for the side-mounted anus, nose horns or glow-in-the-dark digestive tract, you’d probably never suspect there was anything unusual here at all!

Feeding with a foot

While the nose-horns are attention grabbing, the Phylliroe’s gripping is thanks to it’s remaining slug-anatomy. Just below it’s mouth, the slug has the miniaturized foot from its ancestor’s time on the sea floor. While slug and snail feet are normally used to grip and push along the ground, Phylliroe uses its sticky chin to hold onto it’s prey while it eats. The tentacle-like horns, called rhinophores, seem like they could help push food into the slug’s mouth, but they’re actually where the slug carries scent receptors, helping it seek out jellyfish to eat.

Young Philliroe actually reverse this process slightly. Instead of chasing down smaller jellyfish, they find one larger than themselves and use the sticky foot to hold on for a ride. They then eat the jellyfish at their leisure while being escorted through the water until they’re big enough to head out on their own (which is only around five centimeters).

Once a jellyfish has been sucked down, its digested in the dazzling, glow-in-the-dark digestive system. This bioluminescence isn’t fully understood, but if it’s like many other glowing, deep-sea creatures, it may help attract prey or other potential mates. Even though many species of Phylliroe are hermaphrodites, finding a mate still has genetic advantages so they’d have reason to seek each other out.

As a final testament to the jumbled anatomy of this creature, digestive waste is expelled from the side of the slug’s torso. Assuming the fish-like body evolved for maneuverability in the water, it seems that the location of the anus is less critical to a fish’s body plan than you might assume. Assuming you were considering the best ways to copying being a fish in the first place.

Source: Meet the sea slug that looks like a fish, lives in the deep sea, and glows by RR Helm, Deep Sea News