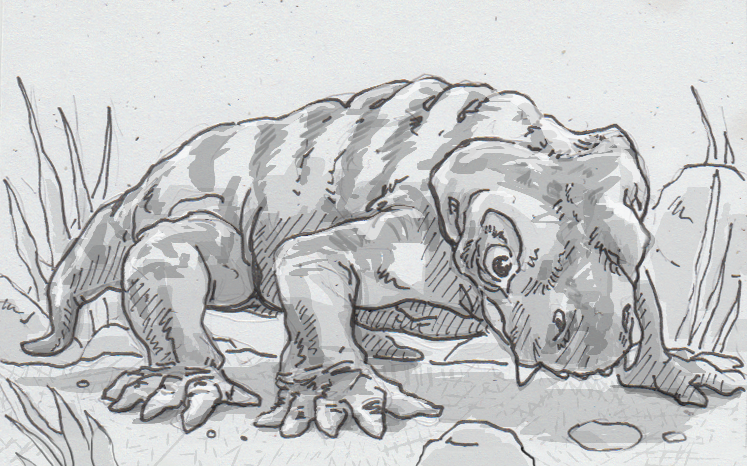 When massive volcanoes are destroying ecosystems around the world, it may not be a good time to put all one’s genetic eggs in one basket. This seems to be lesson from ancient Therapsids, who may have survived the mass extinction at the end of the Permian period by avoiding long term plans, or even long lives. While earlier generations of these precursors to mammals grew to impressive, rhino-sized beasts, the animals that managed to outlive the volcanic destruction did so by staying small, and dying young.

As a case study, scientists looked at Lystrosaurus, a creature that, in better days, would have lived around 15 years, growing to six feet long, weighing over 200 pounds. However, fossils dated just after the time of the eruptions of Siberian volcanoes that triggered the Permian-Triassic extinctions 252 million years ago never got that big, because they didn’t have time to. Instead, the largest specimens were only growing to the size of a large dog, with growth markers in their bones indicating that they were only two to three years old. Researchers then suspected that in a time when reliable resources were scarce, finding the amount of food needed to feed an adult body may not have been feasible. It seems that the successful Lystrosauruses didn’t want to play those odds, and they started reproducing at a younger age, effectively shrinking their species.

Simulating if age and size matter

Researchers didn’t have any direct evidence of reproductive activity in the fossils, but they did design a simulation to test if this hypothesis made sense. In their models, reproducing in the short term made a 40% improvement of surviving in the long term. Beyond the simulation, this matches observed trends in some modern species, like the Atlantic cod. As human fishing has put pressure on the largest fish, populations are having to spawn at younger ages to make sure they have a chance to do so.

Scaling up and down in a restabilized climate

That uptick in survival rates was apparently enough to carry on in a drastically reshaped world. After five million years of disruption, the restablized ecosystems were no longer dominated by Lystrosaurus‘ fellow therapsids. While some members of the family carried on, eventually downsizing into the rodent-like ancestors of modern mammals, 70% of terrestrial species went extinct, leaving an opening for archosaurs like early dinosaurs to begin to take over the Earth, growing older and bigger all over again.