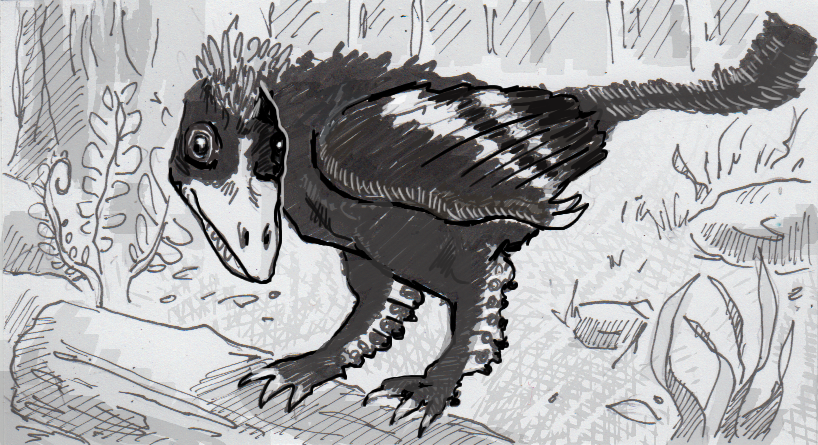 One of the frustrating things about fossils is that even though they can preserve amazing details like feather impressions, unborn embryos or an animal’s last meal, it’s been hard to know what animals like dinosaurs really looked like on the outside, especially when it comes to their coloration. It’s probably safe to assume dinosaurs weren’t drab grays and greens like in old toys and movies, but fossilized bones just aren’t going to tell the whole story of these animals’ appearance. Fortunately, we’ve also found some feathers.

While lots of evidence for fuzzed dinosaurs comes from impressions left behind by long-decomposed feathers, an Anchiornis huxleyi specimen actually preserved the feathers themselves. Looking at samples of those feathers, scientists were able to find what they believed to be melansosomes. Melanosomes are special structures in cells that produce melanin, the most common pigment found in animals, including humans’ hair and skin. By analyzing these melanosomes and comparing them to modern animals, researchers came up with a color map for A. huxleyi, which, perhaps unsurprisingly, wasn’t too different from a Silver Spangled Hamburg chicken, covered mostly in black and white, with accents of coppery-brown.

However, identifying fossilized structures smaller than a cell may be easier said than done. Concerns were raised that these supposed melanosomes were possibly other microscopic structures, including a foreign bacteria that got packaged with the rest of the dinosaur when it was fossilized. Good science depends on evaluating and reevaluating evidence, and so the structures were studied again under an electron microscope. When the structural data held up, the next check was based on chemistry.

While living tissue wasn’t available, researchers were still able to look for trace evidence of specific chemicals that would be present in melanosomes, but not bacteria. Various forms of spectrometry were used, and they found molecular “signatures” that matched modern animals’ melanin. Those were then compared to microbial pigments to make sure the coloration evidence wasn’t just contamination from a third party.

Excitingly, A. huxleyi’s coloration held up. This not only gives us a firmer picture of the small theropod with flashy, contrasting colors (maybe it was male?), but it also establishes new lines of research for the future. If melanosomes are verifiable, we might be able to find them in more fossils in the future. Guesses at coloration can start to then inform us on a new vector of evolution, particularly around issues like camouflage vs. sexual selection. Assuming we can find more feathers.