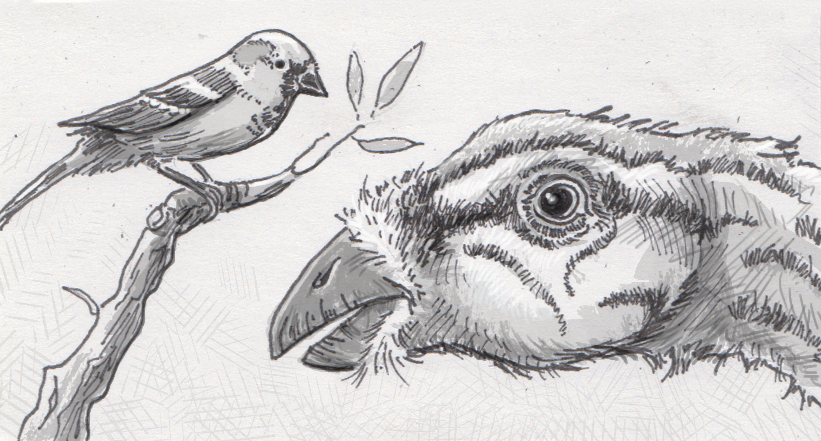 How did evolution build a chicken out of Tyrannosaurus parts? There’s no doubt that modern birds evolved from theropod dinosaurs millions of years ago, but scientists still want to know exactly how that transition occurred. Anatomy usually doesn’t appear or reappear all at once, but is instead resized and reshaped into forms that will better serve a creature in its changing environment. However, when it comes to the transformation from a T. rex to a chicken, some more dramatic swaps somehow took place across dinosaurs’ skulls, particularly with vanishing teeth and the rise of big beaks.

Thorough investigations of swaths of reptiles, dinosaurs and birds have found that the transformation from a theropod’s toothy snout to a bird’s hard beak had its roots in the individual life-cycles of various theropods. Limusaurus inextricabilis was a theropod that was born with teeth, but lost them entirely by the time it was an adult. Computed tomography (CT) scans of Limusaurus skulls found that even after this change took place, the adults still had tooth sockets in their lower jaws. Their mouths became beaks because those sockets were basically covered up by a sheath of material called keratin.

Developing a beak from birth

Keratin is a fibrous material that all kinds of animals use to grow a huge variety of structures on their bodies. Keratin can form hair, horns, feathers, claws and fingernails, all with the possible advantage of being a flexible at smaller sizes, to help avoid breaking, while also being easier to replenish than harder materials like enamel-covered teeth. So while a creature like Limusaurus gave up meat-slicing teeth as it aged, it was gaining a strong, repairable beak that could still help it capture all the calories it needed.

Of course, modern birds don’t have to wait until they’ve fledged to enjoy the benefits of a beak. Researchers believe that over time, avian dinosaurs started the process of growing their keratin sheaths earlier and earlier in their lives, eventually starting before hatchlings even exited their eggs. At some point, this meant that these dinosaurs skipped their toothy phase altogether, jumping straight to a beak from the beginning. Unsurprisingly, the gene that seems to spur beak growth, BMP4, has also been found to suppress the development of teeth, putting this whole transition together in a single mechanism.

There’s more to being a bird than a hard beak though. Our modern feathered friends also generally have proportionally bigger brain cases than their ancient relatives, generally with a rounder, roomier shape over all. A separate study again looked at skull anatomy across reptiles, dinosaurs and birds, and found that while reptile heads don’t show a ton of change in the fossil record, there’s a bigger jump from non-avian dinosaurs to modern birds. Researchers believe that as the bird brains got bigger, the frontal and parietal bones in the skull basically had to balloon about to accommodate them. They don’t yet have anything as concrete as a single regulatory gene to point to, but the advantages of a bigger brain seem like an obvious evolutionary pressure to warrant reshaping the back of a species’ skull.

Source: How did dinosaurs evolve beaks and become birds? Scientists think they have the answer by Michael J. Benton, Phys.org