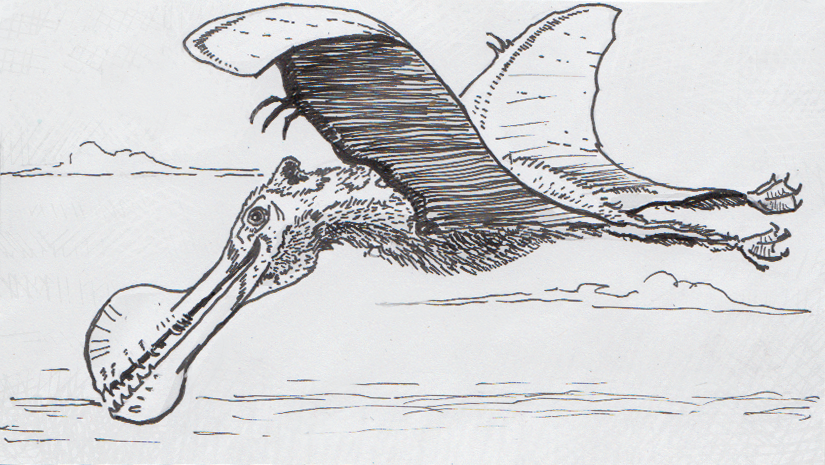 As we find more and more evidence of fuzzy and even feathery dinosaurs, it’s good to remember that their Mesozoic neighbors, the pterosaurs,  were also keeping up with prehistoric fashion trends, having plenty of fuzz of their own. In fact, their fuzz even has it’s own name: Pycnofibers.

Pycnofiber is the name given to the fossilized filaments found on many pterosaur specimens. While it’s sometimes found densely enough to be compared to fur, the structure of each strand is different from both actual feathers and mammalian fur. Pycnofibers only had a single passage per filament, and did not grow from a root below the skin, as with fur. But the insulating fibers are otherwise similar enough that their origin has become a point of interest.

Who had the first fuzz?

At this point there are three major possibilities for the evolutionary origin of pycnofibers. The first is that it was a case of convergent evolution. The utility of body-covering fluff was such a good match for the environment that both pterosaurs and dinosaurs independently evolved such structures. In dinosaurs, there’s also a chance that their fuzz evolved more than once as another example of convergent evolution.

The second option is that the common ancestor of pterosaurs and dinosaurs had a genetic predisposition for bristles or fuzz, but hadn’t actually expressed those genes themselves. They possibly carried DNA that was close to being expressed as protofeathers or pycnofibers, and so it didn’t take much more time for that lineage’s descendants to actually start growing those structures.

Finally, there’s also a chance that the common ancestor was the first fuzzy creature themselves, and that both pterosaurs and dinosaurs were growing their various forms of filaments from the start. (Which would then raise the question of why their variations fuzz structure diverged into feathers vs. pycnofibers.)

The confirmation of any of these will require more evidence from those common ancestors, probably from around the early Triassic period and before. Hopefully with the right fossils we’ll know who is responsible for all these creatures’ tufts, bristles, feathers, etc.