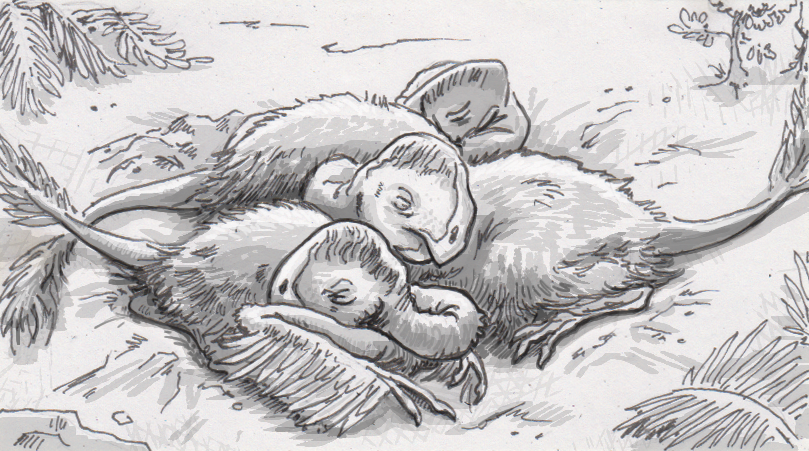 Three oviraptor siblings have been snuggled together since the Cretaceous

70 million years ago, three oviraptors bedded down for the last time, possibly dying together in their sleep. Since then, they’ve managed to rest in relative piece (sorry!) as two of the threes’  skeletons are mostly intact. It’s not the first time we’ve found evidence of oviraptors on nests, but these three don’t seem to have been guarding any eggs. They were likely siblings, and spent their final moments trying to guard each other.

When fossils are found in proximity to each other, paleontologists have to be careful about assuming they were together temporally. In this case, however, the bones and arrangement of the skeletons strongly implies that the three theropod dinosaurs were once in direct contact with each other, right down to one specimen curving its body to push against its neighbor. The fact that these postures aren’t the classic death pose, but instead matches the communal roosting of living species like crows, right down to their heads being tucked over their backs, further supports the notion that these three curled up together on purpose.

Animals don’t normally pile up with strangers at random. Because these three dinosaurs all show similar bone growth and developmental maturity, such as matching but immature head crests, scientists believe there’s a good chance they were all siblings, probably in adolescence. Again, this echos the behavior of living birds, such as ravens that stay near their family, even as they’re old enough to feasibly survive on their own.

Motivations in their final moments

With all of this evidence suggesting the three oviraptors were snuggling up together intentionally, we can sadly only speculate about their motivation for doing so. One hypothesis is that they were trying to protect themselves from a sandstorm. This would help explain their deaths and well-protected burial, but it they somehow seem too tranquil for a demise involving high winds. There’s a chance they were sleeping due to the similarity of their poses to some birds, but that doesn’t really explain why they never woke up. However, if they were trying to stay warm together to try and survive extreme cold, then this final snuggle-session fits together pretty well. It would also support other evidence about some dinosaurs being warm-blooded, as the warmth they’d have been trying to preserve would have been coming from their bodies.

My third grader asked: Exactly how old were they?

They were estimated at being two to five years old, and probably weighed close to 100 pounds each. At this age, they probably stuck together as a group to not compete with adults, but also not be totally left on their own.