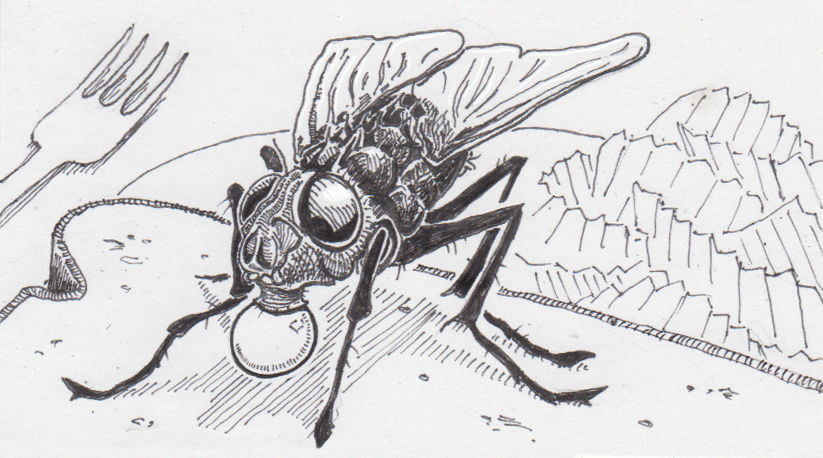 So you probably weren’t about to invite a fly to land on your food, or even your body, but were you sure about why you had that instinct? Sure, it’s a good rule to not want any creature to sit in the food you’re about to eat, but houseflies quite literally bring a few extra-gross features to the table. Amazingly, the most concerning of a housefly’s activity isn’t their vomit or possibly even their feces, because the nastiest stuff tends to be stuck to their feet.

Puking on your food

Houseflies (Musca domestica), like other insects, can’t chew like you can. Like tiny, more irritating babies, they need their food to be soft and mushy, but without teeth or even jaws they have to liquefy things chemically instead of mechanically. To soften up a blob of food, they barf up a droplet of “regurgitate,” which is basically digestive enzymes that less revolting creatures would keep inside their bodies, or at least some kind of stabby mouth part. Housefly mouths are only good for lapping and sponging up liquids, so they either leave a bit of enzyme hanging off their tongue to help get at softer food, or spew a bigger dose on food that needs more time to break down.

Pooping on your food

Once the food is soft enough, the fly can then lap it up where it will be further digested in the insect’s midgut. Fly digestion, like yours, produces waste, and flies are likely to poop once they’ve gotten stripped their liquefied meals of their nutritional value. This does not mean, however, that they poop every time they land. They poop frequently enough to create what can look like splatter patterns if you know what to look for, but they’re not defecating every time they touch down on you or your food.

Pathogens on your food

As icky as vomit and feces may be, they’re not the most concerning part of a fly landing on your food. Fly feet and bodies are actually much more likely to carry and spread pathogens like, including bacteria that can cause cholera, dysentery and typhoid. A brief touchdown probably isn’t a huge reason to worry, as not enough bacteria will be transferred to necessarily kick off an infection. However, if a fly has had time to really wander around on your dinner, you might want to eat something else, especially if you’re in the countryside.

The reason locales matter is they can influence just how dirty a fly’s feet are likely to be. Flies love things like feces, decaying corpses and rotting vegetable matter, as they provide both food and places to lay eggs. Contact with these items is where the flies pick up bacteria that they can carry back to you, and in general flies in urban areas have fewer encounters with dead animals and feces, unless your neighbor can’t pick up after their dog. You’ve probably seen a fly vigorously cleaning its eyes, wings and body, but until you can get them to use soapy water, that cleaning won’t eliminate the pathogens that you don’t want to eat.

Source: Cough it Up – Fly Vomit by Nancy Miorelli, Ask an Entomologist