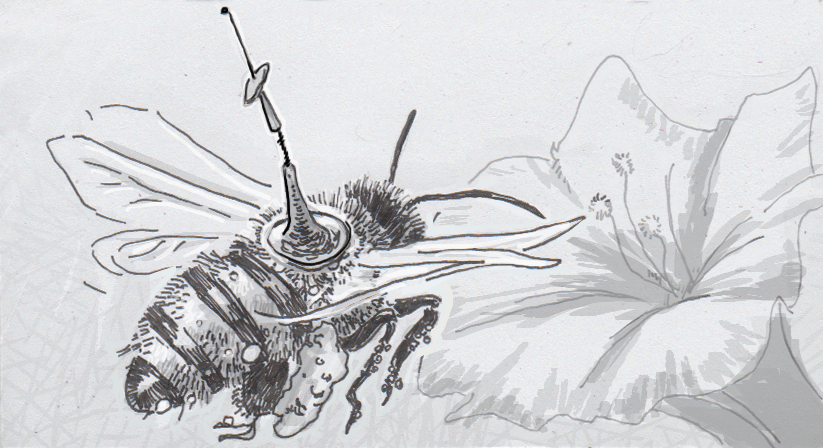 We know bees pollinate flowers as they gather nectar and pollen. We know they communicate with each other at the hive. We know they occasionally migrate to new homes. But until recently, we didn’t really know what bees were up to all day. Anecdotes about certain moments or activities is good to know, but with the crucial role bees play in enabling the diverse range of fruits and vegetables humans like to eat, scientists wanted to know what bees did with their time for every day of their one to ten months on Earth.

To find out what bees were really up to, scientists devised tiny radio transmitters to four bees. These light-weight electronics reported the 244 flights of these bees, which covered over 110 miles altogether. In general, these flights showed that bees participate in both exploration and foraging when they leave the hive each morning. Some time is spent scouting for new food sources, while the rest is directed at collecting nectar from previously discovered flowers. The exact ratio of these two activities varies though, possibly indicating individual bees’ personalities.

Two of the four bees kept a fairly balanced schedule. They mixed exploration and foraging fairly regularly throughout their whole lives, never focusing on one type of task for too long. The other two bees operated at extremes though, with one looking to ever wider horizons, while the other systematically worked through food sources according to an apparently strict methodology.

Setting out or staying put

This thorough gatherer started with three flights for exploration, then switched to strikingly careful foraging behavior. For six days in a row, she methodically worked through a single location, as if to leave no flower behind. Once that area had been exhausted, she didn’t switch back to exploration immediately, but instead began working through a second location that had originally been scouted some six or seven days before.

In contrast, the explorer bee never settled down once in her life. Every day was spent visiting a new location, never foraging in the same place twice. This might seem relatively inefficient, especially compared to her more methodical sister, but for the hive, this diversity of approaches may be valuable. Since bees share information about their discoveries with each other, this explorer bee may have been mapping a larger area for other bees to visit later. For as granular as the tracking in this study was, we can’t know how these four individuals impacted the behaviors of other bees in the hive. Understanding these dynamics is important though, especially we try to better support these pollinating insects we depend on for our own food supplies.

Source: Radar tracking reveals the ‘life stories’ of bumblebees as they forage for food, Scienmag