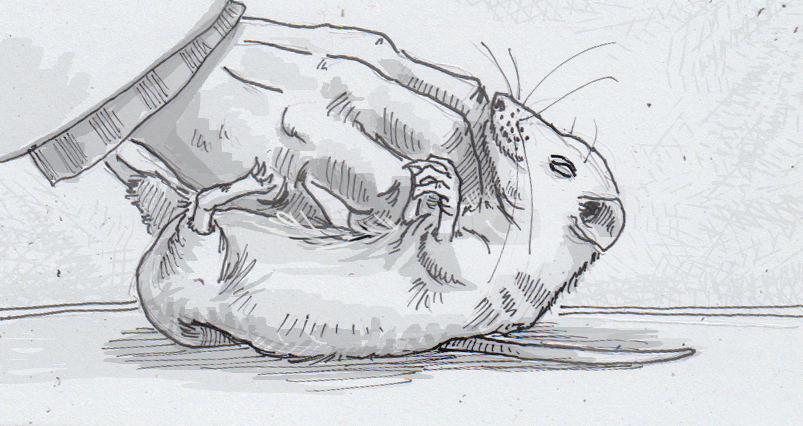 Tittering rats reveal where tickles take place in the brain

Most folks know if they’re ticklish on their fee or torso, but forget about their somatosensory cortex, probably because it’s hard to tickle without electrodes being implanted into their brain. Still, new research with happily squeaking rats is showing that this is where the magic happens that makes us giggle and laugh when at play. The rats’ responses also point to possible explanations for where laughing about tickles comes from in the first place.

In what was probably the happiest experience a lab rat could hope for, researchers methodically tickled rats across different parts of the body to see how they responded, both inside and out. Externally, tickled rats vocalize with ultrasonic ‘chirps’ that seem to be the rat equivalent of a laugh or giggle. What’s more, the rats that chirped the most during a tickle session would engage in other behaviors associated with joy and play, such as hopping up and down, or chasing the hand of the researcher engaging with them for more tickles. However, finding out how much rats can behave like happy, playful kids wasn’t the real takeaway here— for that, scientists brought out some electrodes.

On the body, in the brain

In the rats’ brains, scientists were able to isolate the portion of the brain most responsive to tickling stimuli. They focused on activity in the somatosensory cortex, a band of neurons across the top of your head involved with processing touch sensations from your hole body. Parts of the body with more nerves, like your fingertips, get more gray matter-real estate than bits that are less sensitive, like your shin. The fact that this cortex has neurons allocated for different body parts worked well for seeing where rats were most responsive to tickling— tickled tails didn’t trigger a lot of brain activity or laughs, but tickled bellies lit up nerves associated with the torso and lots of happy squeaks from the test subjects. Stimulating this part of the brain directly could even make the rats laugh, no fingers required.

Another familiar trend that emerged with these chirping rats was that it’s harder to laugh when you’re not in a good mood. Rats isolated under bright lights to induce anxiety were less responsive to tickling, both in their behavior and brain activity. The assumption is that fear responses overpower the somatosensory cortex, further pointing to the fact that tickling is linked to happier emotions, or at least social play.

Much of the above may sound familiar to anyone that’s had a good tickle, but tracing the exact components of how these responses work helps us understand our own evolution. Tickling is not universal across mammals as far as we can tell, but dogs, rats and various other primates having their own take on laughter in response to these sensations shows a trend among playful, social animals. It’s thought that tickling may have evolved to help reward play, which is a way many animals learn about their world and peers. Tickling may just be a fun reward for play, in case playful interaction wasn’t enough on its own.