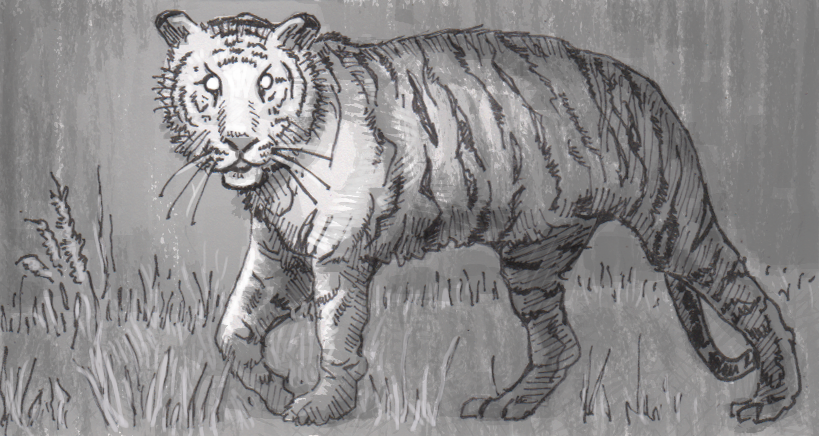 To avoid interactions with humans, more animals are becoming increasingly active at night

Millions of years ago, tiny mammals faced overwhelming competition from dinosaurs of all shapes and sizes. To avoid being gobbled up by hungry raptors or crushed under a distracted stegosaur, our shrew-like ancestors had to find a safe niche in their ecosystem where they wouldn’t be directly at odds with the dominant animals of the Mesozoic era. Their solution was to become nocturnal, allowing them to minimize contact with dinosaurs while continuing to live in the same locations. Once those dinosaurs were wiped out, mammals diversified and enjoyed more time in the sun, becoming the dominant vertebrates on land in the shape of deer, dogs, bears and more. However, research indicates that many species are being pressed back into the shadows, avoiding contact with the latest form of world-dominating creatures— humans.

Hints of this development have been noted for years. Nepalese tigers (Panthera tigris tigris), for instance, were documented shifting to a nocturnal schedule back in 2012. Motion-triggered cameras were set up in various locations around the tigers’ habitat, revealing a clear pattern in when the tigers were active. In places with less human activity, the tigers traveled day and night, but areas frequented by humans reduced their daytime activity by at least six percent.

These night-owl tigers were apparently part of a larger trend. At this point, 76 studies of 62 species have seen similar shifts in animals’ schedules. From lions to otters, creatures around the world seem to be starting their day at night to minimize any contact with humans. That contact doesn’t even need to be explicitly dangerous their interactions with humans. While avoiding hunters may seem obvious, the analysis found that animals are changing their behavior around seemingly innocuous activities, like day hikes on footpaths. As much as people try to take only photos and leave only footprints, even a footprint may make some of our furry friends think twice about their daily routines.

This obviously isn’t the only time humans have functioned as an environmental pressure on wildlife, but it still stings a bit to realize how far other species will go to avoid being around us. Egos aside, biologists actually see an upside to this strategy, which is that it might work. While it’s obviously going to be disruptive to ecosystems if creatures like lions are staying up later to find food, the lions will probably still be better off avoiding potentially dangerous interactions with humans. As some species have found, coming out after people have gone to bed can work pretty well, allowing them to live in closer proximity to human developments than would otherwise be possible. Basically, if this strategy kept our ancestors safe from millions of years of dinosaurs, it will hopefully offer some of our current kin a way to stay safe from us.

Source: Many animals are shifting from day to night to avoid people by Emiliano Rodriguez Mega, Phys.org