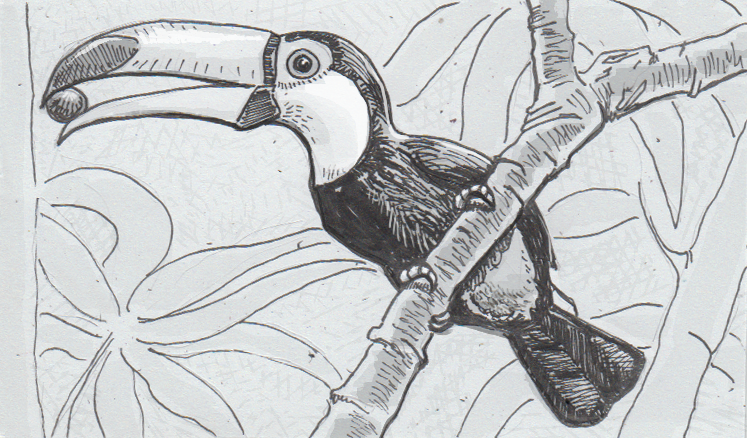 Most of the animal kingdom’s biggest mouths are associated with kind of amazing food consumption. Hippos will happily crunch a whole watermelon at once, a blue whale gobbles half-a-million krill at once, and of course a dinosaur like Tyrannosaurus rex could likely bite through some of the biggest bones in history. Toucans, on the other hand, are baffling in comparison. Their mouth can be as big as half their body-length, but researchers have had a hard time understanding what this superlative snout helps them eat. In fact, it’s possible that these beaks got big for other reasons entirely.

Most toucans survive on fruit, which don’t really require that much beak to catch or eat (just ask a parrot.) The birds are sometimes seen using their beaks for food otherwise out of reach, but it’s odd that the long necks found on many birds couldn’t serve the same purpose. Some species, like the Toco toucan (Ramphastos toco) will sometimes augment their diet with small birds, eggs or lizards, and this beak might help with striking at targets in nooks and crannies, but their honeycombed mouth isn’t especially reinforced for serious stabbing or biting. Catching the occasional lizard also doesn’t explain the bright markings found on many species’ mouths.

When untangling the origins of eye-catching anatomy, one of the common culprits is sexual selection. Peacocks are one of the go-to examples, where males carry enormous tails intended to help them impress potential mates. These sorts of structures or markings are usually more pronounced in one sex or the other though, and both male and female toucans are equally likely to have large, brightly colored beaks. Some researchers have suggested that the markings actually help camouflage the birds in the upper canopies of the rain forests where they live, but in many cases those same birds are quite noisy on a regular basis, indicating that stealth is not a huge priority.

One of the more intriguing traits of toucan beaks turns out to be visible only through infra-red cameras. When the birds get overheated, due to ambient conditions or activity, they can use their beaks to shed heat. Experiments have found this to be a dynamic process, with blood flow increased to the beaks only when necessary, where it can shed heat to the surrounding air. This system allows toucans to lower their body temperature by as much as six degrees Centigrade, but while it’s very effective, scientists hesitate to say it is the root cause of the big beaks. If shedding heat is so important it could steer these birds’ evolution to this extreme, why don’t more species also have radiating beaks?

That question might need some refinement soon, as a second radiating-beak has recently been confirmed. Southern yellow-billed hornbills (Tockus leucomelas) have a very similar heat-shedding ability to toucans, diverting heat into their beaks when ambient temperatures get to 87° Fahrenheit. While this discovery points to heat loss possibly being a bigger deal to birds than previously realized, it doesn’t paint the clearest evolutionary timeline, since T. leucomelas doesn’t live in the same tropical environments toucans do. What’s more, they’re also not the closest relatives, meaning it was either a very distant shared ancestor that first came up with this trick, or we have a case of convergent evolution, and these birds evolved this personal climate control on separately.