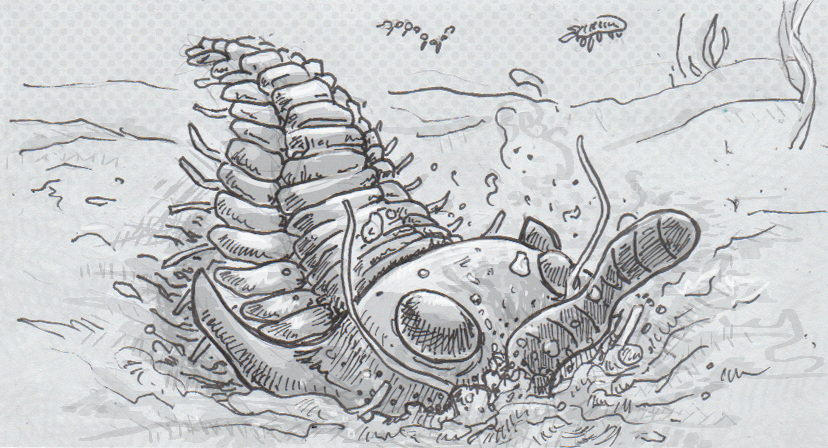 When looking at a fossilized trilobite, your first thoughts probably wouldn’t be those of fear or awe. While the largest of these ancient creatures could get up to 28 inches in length, they lacked the obvious serrated teeth or hook-shaped claws that normally catch our attention when thinking of prehistoric predators. Of course, context counts for a lot, and to the burrowing worms that were on a trilobite’s menu, these armored arthropods were apparently a threat even to prey hiding under the sea floor.

The story of such a predation was recorded in trace fossils found Missouri. Missouri was the bottom of an ocean 540 million years ago, and so the fossils found there show activity that took place on the sandy sea floor. Back in the Cambrian period, there was likely a dense layer of microbes on the sands, which attracted the interest of some kind of worm-shaped creatures. We can only speculate on which ones, as they have been removed from these fossil records, leaving behind a series of tracks and tubes that show how they burrowed under the sand.

They also show when and where the worms were removed from their hiding-spots. Criss-crossing along the burrowing worms were tracks from trilobites. These fossilized tracks, called rusophycus, intersected with the worm tracks 30 percent of the time. While not the mark of perfect efficiency, it does indicate that these intersections were interactions, and not just random overlap. Paleontologists hypothesize that they demonstrate the hunting pattern of the local trilobites, which likely scoured the sea floor before capturing and removing their wormy prey.

The trilobites likely depended on their sense of smell and/or sight to find the worms before digging them out of the ground. Like modern arthropods, trilobites sported a multitude of jointed legs under their armored body, which would have allowed them to excavate and capture their prey. Between the tracking and capture of these wormy meals, these fossils indicate a decently sophisticated hunting ability for an animal that, from our perspective now, looks no more threatening than a flattened football. Which of course I say from the safety and comfort of my desk, 540 million years later.