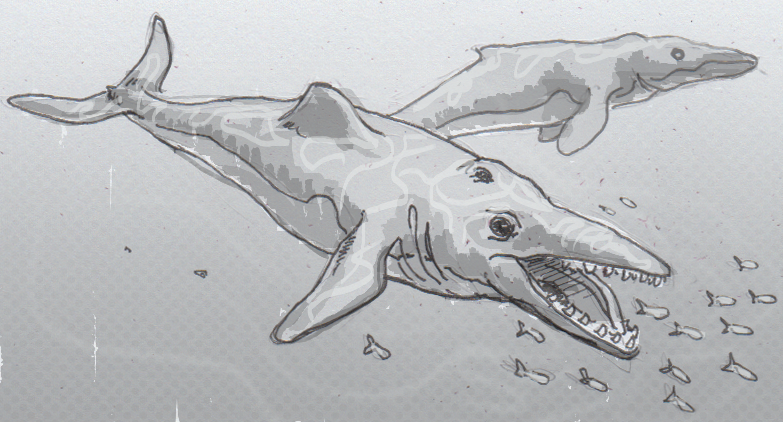 Modern whales are a relatively young lineage. Their ancestors gave up their legs less than 40 million years ago, and they still haven’t gotten around to completely dropping their vestigial hips. Other features that now seem iconic evolved even more recently, and researchers are still putting together the timeline for how small tetrapods became the behemoths of the sea we know today.

Filter feeding whales, like a blue or humpback whale, depends on specialized structures called baleen. To eat, the whale takes a huge mouthful of sea water, then forces the water out between the small slits in the baleen. Anything remaining in the whale’s mouth becomes a meal in a process that can net millions of calories worth of food a day. However, baleen isn’t bone, and thus is hard to find in the fossil record. This has made pinning down the timing of when it evolved rather difficult, although estimates put it somewhere in the Oligocene period, 33 to 23 million years ago.

A yet-unnamed species is offering new clues about this form of feeding, even though it’s clear it wasn’t eating with baleen itself. Instead of traces of baleen, the inner face of the whale’s teeth had repeated, horizontal signs of wear. Fortunately for paleontologists, this pattern of damaged enamel is found on some marine mammals today, such as the walrus. Walruses feed by using their tongue to create suction to draw in food, and it’s assumed that this new species of whale did the same. It’s then likely that this form of suction feeding was a transition point towards full filter feeding, and that baleen was not common before 25 million years ago when this animal lived.

After baleen had evolved, it turns out that whales’ noteworthy bulk did not immediately follow. While filter feeding does stuff the bodies of the world’s biggest animals today, analysis of whale fossils indicates that they didn’t become giants until as recently as 2.5 million years ago. With baleen feeding being established much earlier, researchers have been hypothesizing about what spurred their recent growth if it wasn’t easy eating.

Looking at the oceanic ecosystem at the time, it appears that more nutrients were being added to the sea thanks to ice sheets grinding against the earth. This didn’t cause an immediate change in size, but when the whales started journeying further around the world for the best caches of krill, they may have finally found a pressure to grow bigger. A bigger body could store more nutrients, and cruise at faster speeds, and thus would have furthered the animals food collection, supporting even more growth.