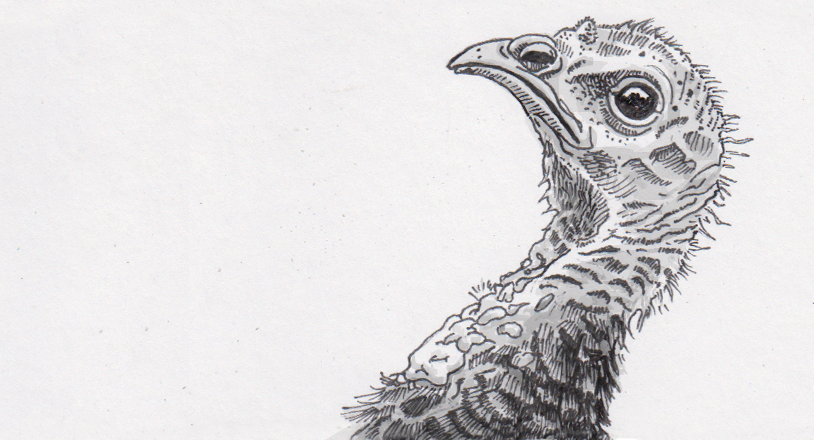 Nobody wants to be a turkey. Even ignoring the fact that Americans will eat 87 million of these birds on holidays alone, there’s just no glory to be had for these iconic birds. Sure, Benjamin Franklin famously tried to promote their social standing, but today turkeys are solidly associated with incompetence, incoherence, and stupidity. Are they actually a particularly pathetic species, or should we be calling fowl (sorry!) over turkey’s maligned reputation?

To be clear, turkeys are unlikely to really compete with a crow or parrot on an IQ test. They’re not known for being especially cunning birds, but they’re certainly not helpless animals either. Wild turkeys (Meleagris gallopavo) will generally live in social groups of up to 200 individuals, usually composed of hens and their young broods. For protection, they rely on camouflage and the eyes and ears of their flock, like many other social birds. At night, they can overcome their relatively heavy bone structure to fly into trees, staying off the ground where they’d be more easily discovered. To further compensate for their limited flight, they’ve also been known to swim, fanning out their tails to increase buoyancy.

The above features were successful enough to see turkeys flourish across North America, but they weren’t enough to really impress humans. Once humans realized that their seed-fed meat was pretty tasty, we started hunting turkeys, taking advantage of their relatively limited mobility. This led to the idea of a “turkey shoot,” as the birds posed little challenge for a well-aimed gun. Limited flight also led to the name “turkey” being used as an insult. In the 1920s, a stage show or movie that performed badly was called a turkey, since sales failed to “take off.” This sense of general failure has probably fed into the idea that turkey’s are stupid, although popular evidence for their poor intelligence is actually a misunderstanding.

Turkeys are supposedly so stupid that they will stand with their mouth agape, looking up into the sky as it rains, even it it means they drown themselves. Assuming this isn’t evidence of suicidal birds looking for a way out, it does seem fair to criticize animals that can’t be bothered to keep themselves alive. What’s not fair is judging intelligence when the real issue is a genetic condition that causes uncontrollable muscles spasms.

The condition is called tetanic torticollar spasming, and it can be spontaneous, or triggered by external stimuli like loud noises. It can be fatal in hatchlings, as it can interfere with getting food and water, but is more survivable in turkeys with later onset of symptoms. If it seems incompatible with living in the wild, that may be because it’s only associated with domestic turkeys. In manipulating their genomes to maximize muscle growth, humans have helped boost the prevalence of the recessive genes that cause the spasms. These poor birds look stupid because of a disability humans have unknowingly promoted, which for some folks may make eating turkeys a bit easier on their conscience.

None of the above necessarily demands that we completely reevaluate our opinion of turkeys. Domestic turkeys in particular do have a life few would be envious of, but maybe we should start associating them with the pitfalls of being delicious instead of just being dumb. Ok, and maybe a bit weird.

Source: Are turkeys really the dumbest animals? by Valerie Strauss, The Washington Post