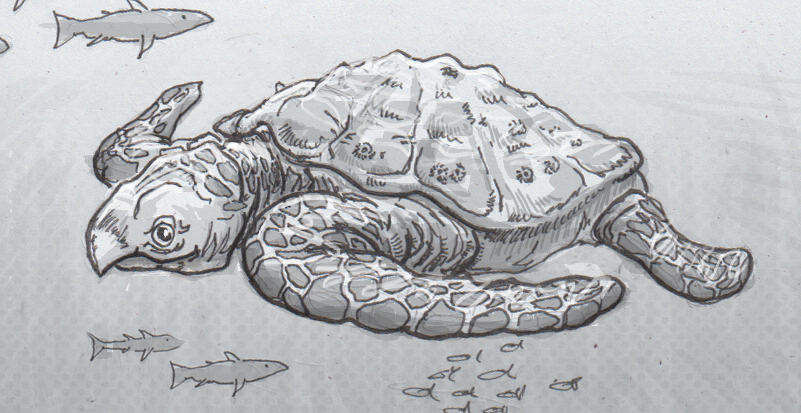 Turtles got their start on land over 200 million years ago, but it would take quite a while for the ocean to be a safe enough place for the ancestors of sea turtles to venture out into the water. Some relatives of sea turtles probably did some paddling here and there, but an abundance of predators likely kept them from ever exploring the wider sea. New analysis of the fossil record suggests that turtles weren’t alone in this predicament, and that ancestors of crocodiles were the culprits that kept other species close to shore.

When crocodiles subjugated the seas and shores

Crocodyliforms, the group of ancestral reptiles that begat modern crocodiles, alligators and caimans, probably aren’t the first thing people think of when it comes oceanic predators. Being an ancient lineage has its advantages though, and some species of sea-faring crocodiles, like Machimosaurus rex, evolved to grow over 30 feet long and weigh three tons. They likely spent very little time on land but still hunted in shallower waters near the shore, where they boxed in other animals like fish and early turtles.

The tables started to turn around 145 million years ago though. Climates shifted around the world, which lowered sea levels dramatically. In some places, this meant that shallow shore lines became cut off from deeper water in the ocean, forcing many crocodyliforms to give up the sea and commit to swamps and lagoons instead. It wasn’t a complete loss for crocodiles, who have obviously managed to hang on to a degree, but it was a big boost for other animals that found the oceans more accessible than ever before.

The disruption of extinctions and relocations at the end of the Jurassic time period proved to be an opportunity for many smaller species. Fossil evidence suggests that many niches formally controlled by creatures like marine crocodiles were filled in by a variety of animals, such as sharks, plesiosaurs and of course, sea turtles. Turtles in the Cretaceous were able to finally stretch their legs (or flippers?) in the ocean, eventually evolving some of the biggest turtles in history, like the nine-foot Protostega gigas and the 13-foot-long Archelon.

Today, sea turtles still need to worry about predatory crocodiles, as well as sharks and even jaguars. But like most threatened animals on Earth, their main concerns today are humans, who threaten their nesting grounds and habitats. Hopefully, we won’t have to suffer through another climate readjustment to make the oceans more habitable for sea turtles again.