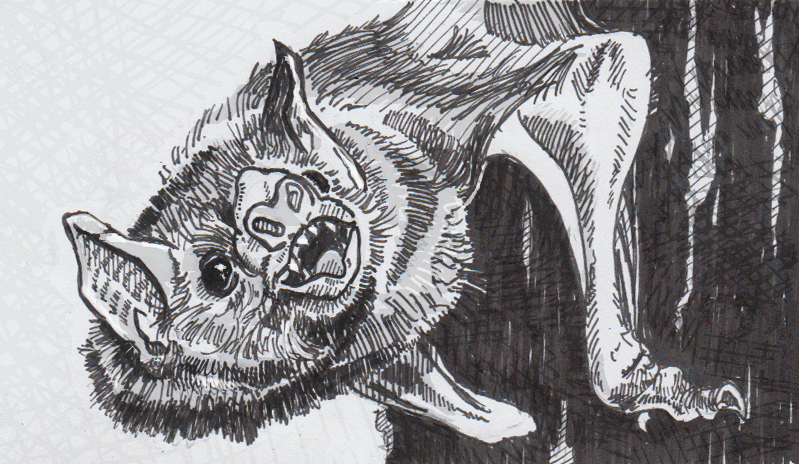 Tracking down the source of a bat’s liquid lunch

We generally know what bats eat: bugs, some fruit, and in the case of Vampire bats, blood. But determining the details of their overall diet is trickier; you can’t be there to witness every bite a nocturnal flying mammal may take in a night. Fortunately, like all animals, they do leave… samples of their diet in convenient, sedentary packages, which scientists regularly turn to to find out what these mysterious mammals are up to.

Not all guano is created equal

But even with the relative convenience of poking through bat poo, there are further complications still. While insectivorous bats leave handy, durable bug shells in their guano, figuring out what vampire bats have been eating is more difficult (ok, we know it was blood, so not what but who). The problem is that while the blood may be detectable after passing through the bat’s digestive tract, the DNA in that blood barely survives the process.

A highly dedicated team from the National Institute of Amazonian Research in Manaus, Brazil combed through the jungle to collect guano for analysis. Over the course of 47 nights they gathered 157 bats for fecal samples. And while the some samples were too degraded to use, many were able to be amplified enough to make some solid observations about the bats’ diets.

A preference for the other white meat

The vampire bats favorite blood was pig blood. This is presumably due to pigs having a higher concentration of red blood cells than other animals. And the domesticated pigs were bitten more than wild pigs, although that was probably just a matter of convenience, since even winged animals don’t want to chase their dinner through the jungle if there’s an equally delicious meal standing in a fenced yard.

Past the pigs, the poo yielded DNA from chickens, dogs, cattle and humans. The latter item there naturally is of special interest, especially when bat bites are thought to be responsible for 25 rabies deaths in Brazil in 2004 to 2005. A better understanding of the bats diet may help us predict and treat the spread of rabies, which clearly justifies further rounds of feces sampling.

My kindergartner asked: What’s rabies? I knew it was a disease spread by infected animal bites, and that there was the concept of ‘foaming at the mouth’ when an animal is rabid. But aside from these basic symptoms, plus the idea that raccoons are big carriers, it turns out there’s a lot more to this virus than I’d realized. Enough that it became an entire post on its own (as well as a warning to not touch unknown animals.)

Source: Vampire bats have a taste for bacon by Chris Cesare , Science