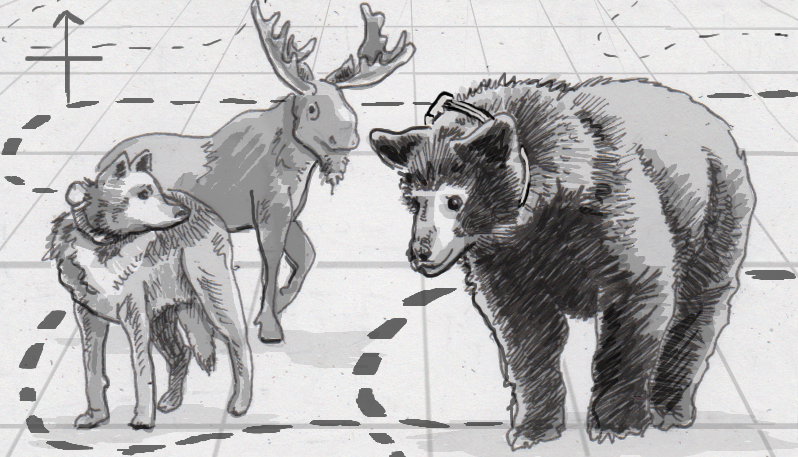 People are getting a lot better at observing animal behavior, mainly because we’re bothering them less. Technological and strategic changes have reshaped how we interact with wildlife in growing recognition of the important roles these animals play in their larger ecosystems. While wildlife ‘management’ once included setting up bleachers for people watching bears digging through trash and discarded food, modern tools are either turning chance encounters into something more productive, or looking to curtail them altogether.

One wildlife-tracking program uses phones to keep tabs on moose. Rather than rely strictly on expensive helicopter surveys of moose populations, ecologists in Alberta, Canada are making use of the smartphones in nearly everyone’s pocket. Intended for people spending time in the moose’s habitat, the app asks users to record the number and locations of moose they may have seen while hiking or hunting. The simple idea has well-received, with close to 14,000 reports sent in last year. That information can then be used to manage moose populations and look for signs of trouble, like dangerous shifts in their territory or possible disease outbreaks.

Plotting the paths of black bears

In Yosemite National Park, black bears (Ursus americanus) are wearing GPS collars to help people avoid running into them. 10 years ago, 1,600 encounters with bears ended with harm to people or property, a number the Park Service is happy to have cut down to just 100 in the last year. They’re also looking to lower the number of accidental collisions on the road, as 28 bears will struck last year by cars. So to cut down on the number of unfortunate surprises, the locations of the bears’ collars can now be seen on the website keepbearswild.org.

The idea is that is people know where the bears are likely to be, or where they’ve been hit on the road, they’ll know to take a bit of extra care in those areas. Drivers have a reminder to slow down, and campers have extra motivation to make sure their food is properly secured each night in a bear box. The data on the website is delayed to keep people from stalking and harassing the animals, but staff has access to live information in case a situation arises where a bear needs to be relocated in a hurry.

Tracking where, and how, wolves run

The bears’ activity is also being studied to look for patterns in their behavior and clues about their ecology, but not with the same degree of detail now being gathered on some wolves. In addition to basic GPS data, new collars on wild wolves are also fitted with accelerometers to get a better sense of what a wolf may be doing at any given moment. With more detailed information, researchers can learn more about the wolves while interfering with their day to day lives less, allowing for a more pleasant life for the animals as well as capture more realistic data.

Extrapolating the movement data of the accelerometers into information about biology and behavior required a bit of calibrating. Since wolves weren’t going to cooperate during a lot of trial and error, researchers enlisted some large dogs to wear collars and demonstrate various activities, like running on treadmills, so that some baselines could be established. The doggie-data was then compared to tests with actual wolves, some of whom did eventually learn to cope with a treadmill. But all this work allows for wild wolves in the Denali National Park to be monitored while roaming with a bit more freedom, and few interruptions, than would otherwise be possible.