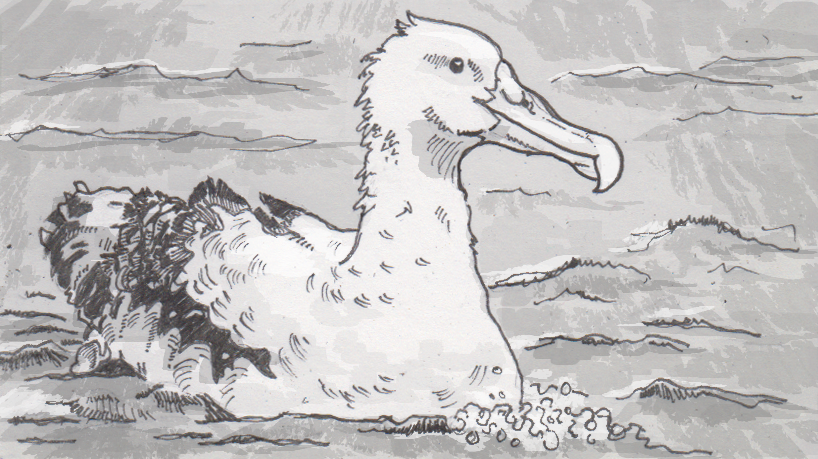 Tracking which traits set wandering albatrosses on the road to success

Most studies of animals try to make predictions about ever member of the species. To examine how a type of animal is likely to interact with some aspect of their environment, it’s helpful to gather data from so many specimens that the quirks or luck of any particular individual doesn’t distort the larger trends at work. However, individual variations can make a big difference too, which is why researchers from the Université de La Rochelle in France have been tracking the lives of wandering albatrosses. Instead of trying to normalize the behavior or confirmation of every bird, they’re focusing on each individual biography to try to see which traits lead to more successful lives.

Wandering albatrosses (Diomedea exulans) were selected not because of any eccentric quirks or polarized behavior, but because they life a long, relatively stable life that could be scrutinized over time. The huge, seafaring birds can live for over 50 years, with clear stages of adolescence and adulthood. They also retain the same mate for their whole lives, caring for a single offspring for at least 10 months after it hatches. The consistency of this lifestyle allows for other variables to be accounted for, painting a clearer picture of which birds are inherently more successful than others.

Chances of success, starting as chicks

When a wandering albatross chick is born, it’s fed for nearly a year by its parents as they fatten it up in preparation for leaving the nest. That first stage of their lives is important, as they don’t return home for at least three years while they learn to take care of themselves. This time also turned out to be the first milestone in a bird’s lifetime trajectory, as birds born in warmer years usually had less food and would grow up to be smaller than their colder peers. Being part of a baby boom also seemed to be detrimental, as chicks born in years with high birth rates ended up performing poorly for the rest of their lives, probably thanks to a lack of resources early on. It’s tough set of challenges to face from birth, and many juvenile albatross don’t even to become parents themselves.

While a healthy childhood is obviously important, researchers found that entering parenthood was a good predictor of an individual’s overall success. Birds that became parents at a younger age, say around six years old, had healthier, longer lives than birds that waited until they were 15 to have their first kid. Parenting age may be predictive because it’s tied to a bird’s overall health and body weight, as hungrier adults will be less likely to reproduce than those that have eaten up more resources. So while becoming a parent is a good reference point, it may be the result of being a fit, adept albatross overall.

As wandering albatross age, new differences can be found. Male birds were found to generally have higher stress levels than females. This seemed to make a significant difference once a bird was over 30 years old, particularly for more successful males. While females seemed to age somewhat gracefully, high-performing males showed faster signs of decline as they got older. They were still reproductively successful overall, but these male birds seemed to pay bigger price for their accomplishments.

At this point, researchers are getting closer to describing what an ideal life looks like for any single albatross. From the moment they hatch, individuals aren’t necessarily on equal footing, and those advantages play out repeatedly in each animal’s lifespan. When examined together, these winning and losing biographies will help explain the evolutionary path of the whole species.

Source: Life of an albatross: Tackling individuality in studies of populations, Phys.org