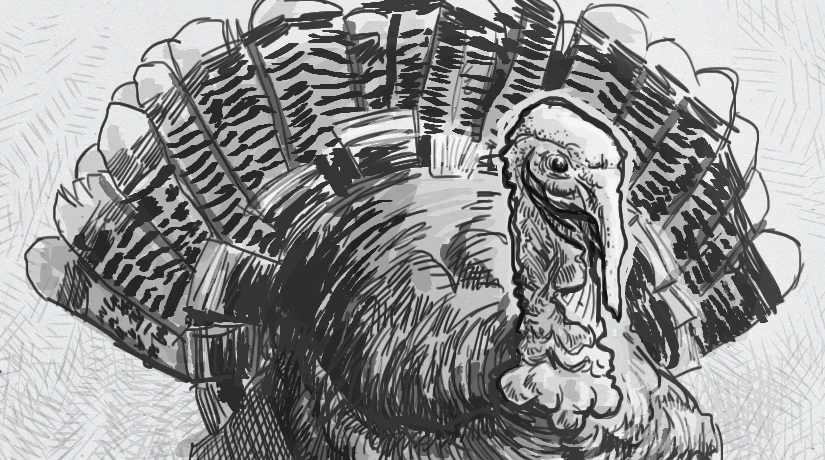 The travels and travails of the domesticated turkey

When the pilgrims at Plymouth sat down to feast at the first Thanksgiving in 1621, they did get to include some familiar comfort food on the menu. While they were famously introduced to new foodstuffs like cornstarch and squash, any turkeys that may (or may not) have been on the table would have actually been well known to any European. While there were native, wild turkeys living on the east coast of North America, turkeys had actually been raised for some time in Europe, having been imported from Mexico before that. The birds we love to eat have actually been on a homogenizing path of domestication since 300 BC, well before any “turkey-day” holiday was even a possibility.

The ancestors of our current, farmed turkeys are Meleagris gallopavo gallopavo, the South Mexican wild turkey. The birds roamed the jungle, and were taken into captivity early on by the Mayan people living there. They didn’t seem to be kept for their meat at that point, with evidence instead pointing to an interest in harvesting their striking plumage. There’s evidence they were eaten at times, but weren’t being raised as a staple of the Mayan diet. This gradually shifted, so that by the 15th century, Spanish explorers encountering the Maya had no trouble finding a turkey dinner.

It’s unknown if the Spanish first tasted turkey baked or deep-fried, but it made a big impression either way. Around 1500, they brought the birds back to Europe, where they quickly caught on as a great addition to any farming operation. This was thanks to their meaty build, but also, again, thanks to an interest in turkey’s feathers. Males in particular, with their noted, high-contrast tail fans were considered an exotic status symbol to impress one’s neighbors across Europe. When settlers began moving to North America in larger numbers in the 17th and 18th century, they brought what was by then considered a slice of their European life with them, importing this domesticated turkey back to the Americas.

Whether or not these Euro-mexican birds were eaten at the first Thanksgiving dinner specifically, we have been eating them ever since. Genetic analysis has shown that the turkeys raised commercially today are descendants of those European farm birds. This lineage has been continuously pushed to be more and more food-friendly, with faster growth and meatier breasts for humans’ dinners. The downside of this focus is that they’re also increasingly homogeneous genetically, meaning they’re ever more susceptible to widespread viral or bacterial infections. By being bred only for their meat, humans have inadvertently also bred out the bits of diversity that would normally act as a firewall to prevent certain epidemics in the species. Some steps have been taken against this trajectory, and less popular strains of turkey are being preserved, not for your sandwiches on Black Friday, but in case this long line of birds finds itself in serious trouble in the future.

Source: Your Thanksgiving Turkey Is a Quintessentially American Bird: An Immigrant by Brian Handwerk, Smithsonian