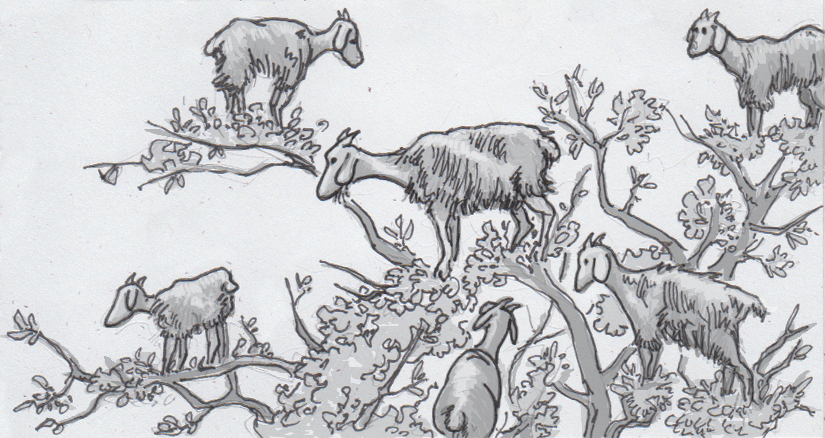 Argan oil may soon loose some of its allure, because it turns out it’s not tied to goat poop as much people thought. Unlike kopi luwak coffee that put civet-processed beans in high demand, the goats that pluck fruit from the argan trees of Morocco have been proven to be spitting out the oil-rich nuts, instead sending them all the way through their digestive tracts. This isn’t to say that the goats are doing some very specialized nut-collection, but experimental evidence has taken poop out of the equation.

The nut-gathering goats may look perfectly ordinary at first glance, but their efforts to harvest the fruit and leaves of an argan tree (Argania spinosa) are fairly amazing. With dexterity worthy of (unrelated) cliff-dwelling mountain goats, these domestic goats will climb trees as high as 30 feet high, staying in the upper branches until a tree has been nearly stripped bare. The goats seem to like the green, fleshy fruit that resembles a large olive, even though it contains a large nut inside. It may take a bit of digestion, but rather than allow the nuts to be passed all the way through the digestive tract, the goats elect to regurgitate the seeds, spitting them out where humans can scoop them up to make oil, dips and of course, upscale beauty products.

To determine exactly how digested the argan nuts were, researchers fed domesticated goats a variety of fruit, monitoring exactly which seeds came out which end of the animal. As ruminants like cows and sheep, goats digest their food throughout four stomachs, regurgitating and re-chewing cud between each phase of digestion. This means that even if the argan fruit was swallowed in the trees, the now-bare nuts weren’t guaranteed a trip through the goats’ entire digestive tract. In testing the goats’ preferences, researchers found that smaller seeds didn’t seem to be noticed, eventually turning up in the goats’ feces. Larger seeds, like those of the argan tree, were rejected and spat out, rather than being reswallowed. So it seems that despite popular lore about the post-poop qualities of Aargan oil, these nuts had only been partially fermented by the goats.

This is mixed news for all the parties involved. The argan trees benefit from this form of seed dispersal, which is common enough in other ecosystems to earn the name endozoochory. If this makes the resulting products seem less special, it may actually be good news for the goats, as the aforementioned coffee made from civet poop was in enough demand to land many wild civets in cramped, inhumane cages for easier harvests. For the herdsmen who gather the goat-gobbled argan nuts, it’s probably a tad more pleasant to pick up spat seeds, although they’ve likely known this all along. If anything, the goats make harvesting these valuable seeds so easy, there are actually concerns about the over-saturation of goat herds among argan trees. Now that the news is out, we’ll see if demand for argan oil declines, which may help over-harvested trees while also revealing some very weird standards for what people want to wipe on their faces.