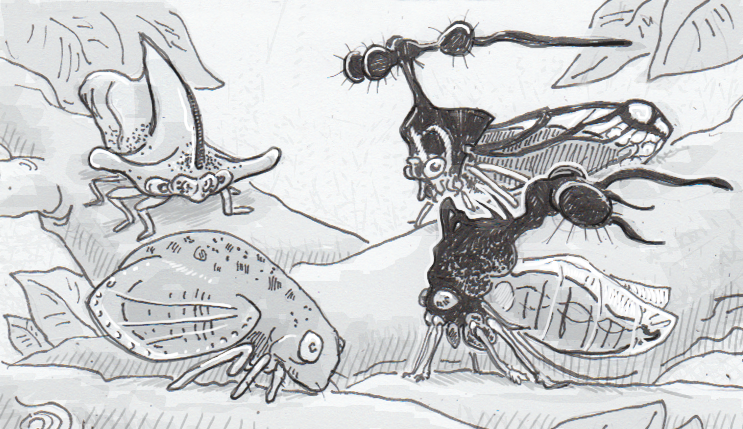 Our yard isn’t too big, and is mostly just grass and dandelions, so turning up with anything beyond a roly poly or garden slug is an exciting event for my first grader. The bug in question was a treehopper, and was an especially unusual find, partly because it’s excellent camouflage gave it an uncanny resemblance to a small, bright green leaf. It also seemed to be on its own, without any relatives or entourage to speak of, which was probably for the best.

Treehoppers first claim to fame is their strange shape. There’s a lot of variation between species, but the unifying principle in their appearance is how much they look like other things. Our visitor was tall and thin, with tiny hints of the veins you’d see in a leaf. Other species mimic thorns you’d find on a plant’s stem, dangerous fungi, and even other insects, like ants. Sometimes this mimicry shapes the treehopper’s whole body, but in other cases it manifests in their pronotum, a segment just behind the bug’s head that can stick up like an elaborate crest. While large, elaborate structures are often tied to sexual selection, such as with a peacock’s tail, both male and female treehoppers can carry these decorations, and so the assumption is that they’re there to help keep the treehoppers safe. Leaf-shaped species can blend in with their surroundings, while others stand out as something unappetizing to predators, such as with the Bocydium globulare attempt to look like the ant-killing Ophiocordyceps fungus.

This isn’t to say that treehoppers live in constant fear of being eaten though. They’re actually quite popular with ants, wasps and in some cases, geckos, all thanks to their sugary poop known as honeydew. These other animals love to eat the calorie rich secretions, and so they’ll follow and even protect treehoppers as they go about their business. Ants will go as far as picking a fight with creatures as large as a human if they feel their favored honeydew producer is in danger.

Humans have an interest in the honeydew as well, but as a problem, not a food source. The honeydew is basically digested sap, extracted from a tree the bug has made an incision in so that it can deposit eggs. If too many treehoppers are present on one tree, they can basically envelop a branch or narrow trunk, damaging the bark and exposing the tree to stress and disease. So rather than the mutualistic relationship the treehoppers can have with ants or wasps, they’re considered pests by humans looking to cultivate food that doesn’t come from bug butts.

Source: Absurd Creature of the Week: This Is an Actual Insect. This Is Not a Joke by Matt Simon, Wired