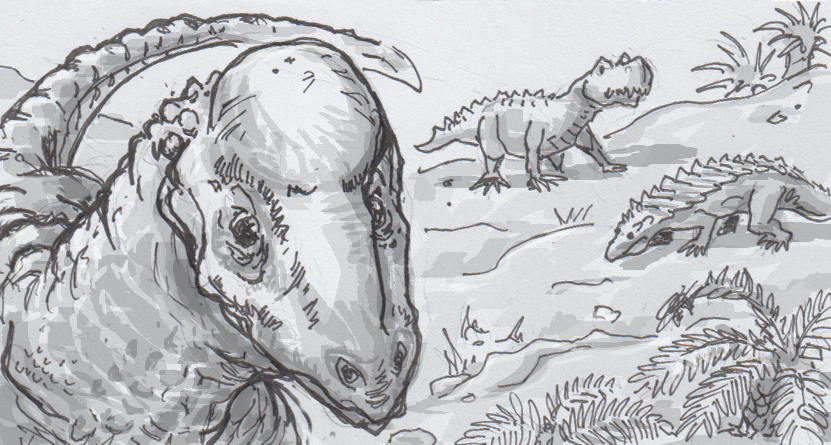 Triopticus primus skull appears to be an indirect precursor to Pachycephalosaurus

While the variety of horns, plates and claws seen in dinosaurs paints a picture of endless and often bizarre biological possibilities, evolution often repeats itself. Sometimes this is with the recreation of certain features, like whales trading feet for fish-like flippers, but in some cases it’s nearly a carbon copy replacement, such as with the world’s two versions of butterflies. When a species evolves a similar structure to an unrelated species, such as whale flippers or how bats and birds have both evolved winged flight, we call it convergent evolution. It’s often clear what’s being achieved with these developmental repeats, but the ancient reptile Triopticus primus has researchers scratching their heads.

Triopticus primus was a large reptile from the Triassic period, a time when the first dinosaurs were just getting started as lithe, bipedal carnivores. We don’t have a complete skeleton of T. primus at this point, but the piece of skull we do have is very revealing, because it indicates the animal had a thick, domed skull. This anatomy is incredibly specific, and has been seen before (or later?) in the Cretaceous dinosaur, Pachycephalosaurus. Using CT scans to look closely at the brain case for T. primus, it’s clear that both animals, without being descendants of one another, both had a number of specializations tied to a thick domed skull. A popular hypothesis is that the animals butted heads like modern goats, but we’re still not completely sure what the point of that skull was, much less what environmental pressures would lead to its evolution twice.

There’s a bit of hope that more of T. primus‘ body will be found. The skull fragment was found in 1940 as part of a Works Progress Administration effort and then basically put into storage until recently. Many fossils that were excavated were not carefully cataloged, and so more clues may be forthcoming. If more of the body can be pieced together, we might better understand what domed heads were really good for, in both the Triassic and the Cretaceous.

In the mean time, a number of reptilian, dinosaur doppelgangers have been found from the Otis Chalk formation were T. primus was found. Like strange, off-brand versions of more familiar dinosaurs, it appears that many ancient reptiles made use of features we now closely associate with later saurians. The twist of course is that the dinosaurs we know, like armored Ankylosaurus, are actually the unrelated follow-ups, while the original Aetosaurus has fallen into obscurity. Then again if something like a domed head worked the first time, why shouldn’t it get used again?