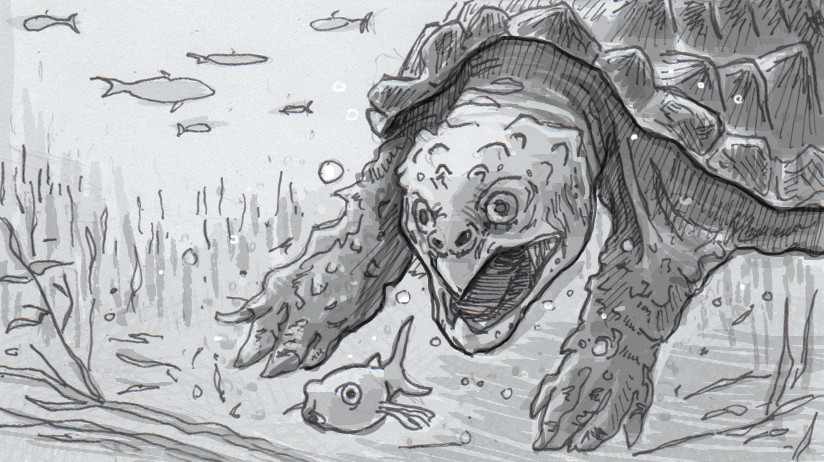 Turtles’ retractable necks may have first evolved for hunting, not hiding

If you’ve ever seen an American box turtle pull its head in its shell, it’s pretty obvious that they’re doing so to protect their head from harm. In that context, the turtle’s shell seems to have evolved to be just big enough to shield its more delicate anatomy, allowing turtles to be protected from predators at any moment. The fossil record, on the other hand, doesn’t really support the notion of such defensively-oriented origins. Instead, some fossilized vertebrae suggest that head retraction may have originated as a way for turtles to actually be more aggressive, pushing their heads forward, rather than hiding them inside a shell.

How to hide your head

Putting aside the sea turtles that can’t retract their heads at all, there are two main groupings of defensive turtles. Pleurodires hide by bending their neck to the side, laying their head across the front of their trunk, almost like they’re closely inspecting their left shoulder. This group of turtles seems to have evolved around 200 million years ago, with modern descendants living primarily in the southern hemisphere around the world. Cryptodires branched off the family tree 35 million years after that, with the distinguishing ability to pull their head “straight” back into their shells, bending their necks vertically to do so.

As much as these behaviors can help protect modern turtles from predators, the incremental evolution to get this safety measure working would have been difficult to survive. When it comes to protecting your head, only being able to partially avoid harm probably doesn’t cut it too well, since a predator that can grab half your face can probably do enough damage to keep you from passing your genes along any further. With this concern in mind, paleontologists looking at vertebrae of an ancient species known as Platychelys oberndorferi noticed some unexpected traits that may help explain what got turtles started on this path in the first place.

P. oberndorferi has been classified as a pleurodire, but their vertebrae didn’t really match up with the expected head-sideways kind of movement the group is known for. Instead, it’s bones seemed better suited for a sort of partial retraction along a straight line. It wouldn’t have been able to pull it’s head into its shell like a modern cryptodire, but its neck and head did seem set up for some kind of telescopic action. The scientists then suspected that rather than evolving to pull back in, this may have originated to help the head reach out.

Two modern species that aren’t closely related to P. oberndorferi may be good models for all this neck activity. Snapping turtles and mata mata turtles independently evolved the ability to extend their necks to snap at prey. As otherwise slowish animals, they can close the distance between themselves and prey more quickly by straightening their necks than they could by plodding along the bottom of the lakes and ponds where they live. From an evolutionary perspective, being able to reach out with your neck was probably easier to iterate on over generations the defensive retraction maneuvers. Once the neck anatomy had been changed to allow for some retraction and extension, exaggerating the retraction movements to hide from danger would have been a smaller, safer step to accomplish.

More fossils are needed to really establish this hypothesis, but it wouldn’t be the first time turtle evolution repurposed a trait that originated for a different purpose. Even though they’re now crucially tied to turtles’ defensive abilities now, turtles’ signature shells probably first developed in order to be a better digger. Ribs along the animals’ backs stiffened and locked to provide leverage at the shoulders, which eventually allowed for full shells. P. oberndorferi‘s neck-stretching hunting technique may just be another step in the history of turtles repurposing their supposedly obvious anatomy.

Source: The Real Reason the Turtle Learned to Hide its Head Will Surprise You by Ben Panko, Smithsonian.com