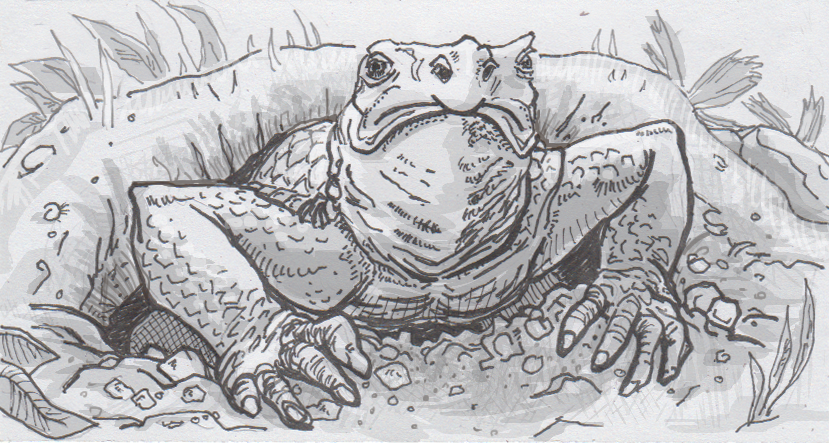 An eight-year-old boy from South Africa recently helped settle an argument over 100 years old that really got started 260 million years ago. At issue was the origin to turtle shells, and what could possibly spur an animal to evolve such an energetically-costly piece of anatomy if it would probably only be useful once fully realized. It was assumed that having half a shell wouldn’t be of use, so why would animals grow the things if they couldn’t provide protection like full-shells do. The fossil found by the young Kobus Snyman, named Eunotosaurus africanus, settles much of this discussion, basically by ignoring the protective aspect of turtle shells entirely, since the first step down this evolutionary path was apparently digging.

For a long time, paleontologists argued that turtles must have started growing shells as defensive structures, probably as overgrown osteoderms. Osteoderms are thick, bony growths you might find on a crocodile’s back, or more obviously making up the armor of a dinosaur like Ankylosaurus. The assumption was that if you just allowed for all those osteoderms to fuse together, you’d then have a complete turtle shell.

Developmental biologists disputed this hypothesis, based not hardened, bony evidence found in the ground but on the delicate growth of modern turtle embryos. The focused on how a turtle shell is grown from modified ribs, and that that development is likely indicative of these reptiles’ evolutionary past. In 2008, paleontologists ended up confirming this concept, discovering  Odontochelys semitestacea, an ancient turtle with ribs flattened into hard chest, but not yet fused into a bony shell. With no osteoderms to point to, it looked like turtles were the products of their fused ribs, not their shells.

Success of a solidified sternum

This still left a question about the possible advantage of such an odd body plan. Stiffened ribs reduce movement (as lizards usually speed up by torquing their body back-and-forth while running) as well as limiting respiration, since the lungs can’t expand as freely behind a harder rib-cage. The fossil of E. africanus fills some of these gaps with both environmental and mechanical information. From a nuts-and-bolts perspective, the stiffened shoulders of this proto-turtle would have given the animal very strong front legs, perfect for digging or swimming. In this case, thick claws plus the location of the fossil point to a subterranean lifestyle, suggesting that the beginnings of turtles’ shells was stemmed from an unusual solution being a better burrower. The fact that South Africa 250 million years ago would have been a very hot and dry area, possibly suffering from intense droughts, provides further evidence that these reptiles wanted to be underground.

Obviously, this doesn’t explain why the hard shells eventually evolved on the animals’ backs, or why other burrowing animals haven’t needed to reinforce their chests in the same way as E. africanus. However, not every adaptation requires later cases of convergent evolution to be plausible. There may be more factors involved in the initial fusing of the turtle’s ribs, but once this body plan got started, it makes sense that these animals with limited mobility would do well to invest in some protective measures like a full-blown shell.

Source: Why Turtles Evolved Shells: It Wasn't for Protection by Ed Yong, The Atlantic