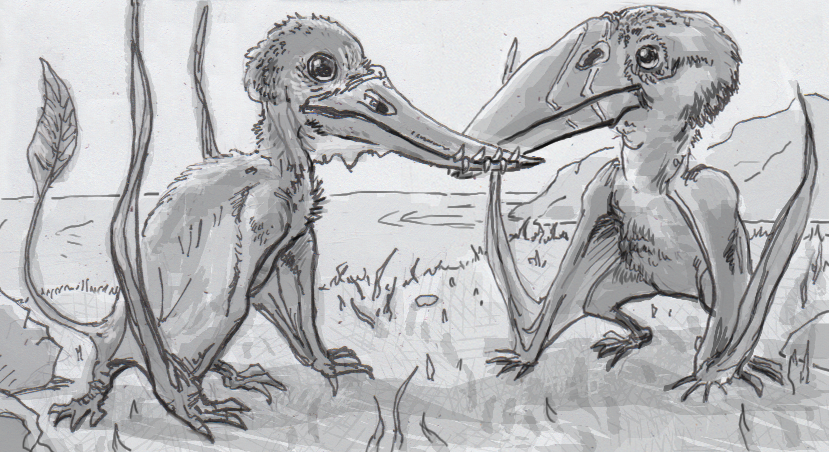 Small creatures have a hard time in the fossil record. Bones can be more easily overlooked, but also crushed, eroded or compressed compared to something like the stout femur of a giant sauropod like Apatosaurus. Small, flying creatures like pterosaurs are even trickier, since they generally evolved to have lithe, hollowed-out bones to minimize the amount of weight they’d need to get into the air. This isn’t to say that finding these skeletons is impossible though, as two small pterosaurs have been announced this week that fill in some gaps in the history of these extinct flying reptiles. Each one stands out in its own way, all while being small enough to fit into a pet carrier.

Allkauren koi is a newly discovered species of pterosaur found in Patagonia. While a complete skeleton was not found, the skull literally stands out for the unusual information it can provide about pterosaur anatomy and evolution. While many pterosaur fossils are so delicate that they’re found essentially flattened in rock, this A. koi specimen’s skull preserved its brain case in 3D. Using CT scans of the fossil then allows for excellent detail in the shape and proportions of the animal’s brain and sensory centers. By allowing comparisons between the relative size of the optic and olfactory bulbs in the brain, paleontologists can make some deductions about what traits the pterosaur relied on to navigate its world. It also helps us understand how pterosaur brains evolved by comparing them to other skull data.

With a mandible stretching just shy of five inches long, nobody would claim that A. koi was a monster of the skies when it was alive in the Jurassic period. Beyond the remarkably well-persevered, if fragile, skull, this size wouldn’t make this species stand out much in its ecosystem. However, the second pterosaur’s significance is tied directly to its small stature, largely because it lived much later in the Cretaceous period.

Carving out a small piece of the Cretaceous

Most pterosaurs found from the late Cretaceous were delightfully gigantic creatures. Quetzalcoatlus norhropi, the poster-child for giant pterosaurs, is thought to have had a wing span close to 32 feet across. With a dearth of smaller pterosaurs from the same time period, the hypothesis has been raised that pterosaurs basically had to go big or go home, as smaller species were completely outdone by the growing number of small, flying birds crowding into the ecosystem. This concept has a few outstanding questions though, such as how younger and thus smaller pterosaurs lived long enough to grow to more hulking sizes, as well as this week’s small collection of tiny bones from British Columbia.

The incomplete skeleton of this new pterosaur unfortunately suffers from some of the common pitfalls of tiny fossils. There’s not enough data to name a new species yet, but at this point signs point to a new, cat-sized pterosaur living 77 million years ago. The first step in its identification was to make sure it wasn’t one of the birds that may have been crowding pterosaurs out. After discovering a pterosaur-specific fusing of vertebrae called a notarium, analysis was shifted to confirm the age of the animal. Growth patters on the wee bones indicate that the wee reptile had reached maturity, even if that gave it a modest wingspan of only five feet across. With any luck, more specimens will be found intact enough to confirm that tiny pterosaurs hadn’t been forced to extinction by their feathered friends.

Source: A ptiny pterosaur from the Late Cretaceous by Elizabeth Martin-Silverstone, Musings of a Clumsy Palaeontologist