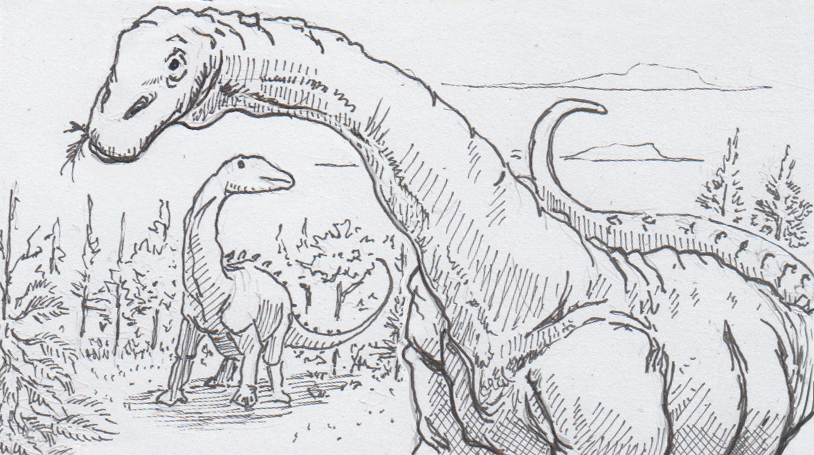 Today, you can get from Argentina to Australia in around 15 hours. Importantly, it needn’t be a one-way trip either, meaning a trip ‘down under’ won’t be cutting you off from the rest of the world. This is a relatively recent luxury, of course. As the many unique species of animals found in Australia suggest, many creatures arrived in on the continent long ago, never to depart. The latest examples of this pattern are a pair titanosaurs that lived around 100 million years ago. As a sub-group of plant-eating, long-necked sauropods like Apatosaurus, titanosaurs first evolved local to South America. The fact that these two new species somehow migrated to Australia offers clues about the Earth’s geography and climate in the Cretaceous period when they lived.

Savannasaurus elliotorum is a new genus and species of titanosaur, accidentally discovered in Queensland during a bit of sheep-herding. In addition to the uncovered toe, paleontologists eventually went on to excavate what amounted to 20 percent of S. elliotorum‘s skeleton. The ten-year process eventually revealed a dinosaur that was originally 40- to 50-feet long, weighing around 22 tons. It certainly wasn’t the largest titanosaur, but with only five sauropods having been discovered in Australia, it was still a significant find.

The second titanosaur wasn’t a new species, but it was the first time anyone has gotten a look at Diamantinasaurus matildae‘s skull. D. matildae was a sort of contemporary of S. elliotorum, and was also a 50-foot-long plant eater, weighing around 20 tons. There’s a chance that it bore loosely arranged armored plating on its skin, called osteoderms, which have been seen on other titanosaurs. However, the incomplete skull was a bit more primitive than researchers expected, and so without more direct evidence of osteoderms, it may be premature to assume these dinosaurs carried more sophisticated anatomy. While osteoderms have been found on titanosaurs in South America, Europe and even India, the migration route to Australia may have still missed out on this trend.

With slightly more primitive features on these titanosaurs, it looks like they probably took a relatively short but limited route to Australia through Antarctica. Antarctica joined the other southern continents around 100 million years ago, but land access would have still been limited by some rather frosty mountain ranges along the way. While sauropods were generally big enough to maintain a stable body temperature thanks to their thick bulk, they wouldn’t have been signing up to brave the snow to reach Australia from South America. A more likely scenario is that there was a period of global warming around 105 million years ago that cleared a more temperate path for the ancestors of these Australian dinosaurs. If more dinosaurs with South American relatives turn up in Australia, it will help cement this hypothesis that many dinosaurs migrated to the outback from what is now the western hemisphere, rather than from Asia.

Source: Huge new dinosaur hints at when sauropods arrived Down Under by John Pickrell, Australian Geographic