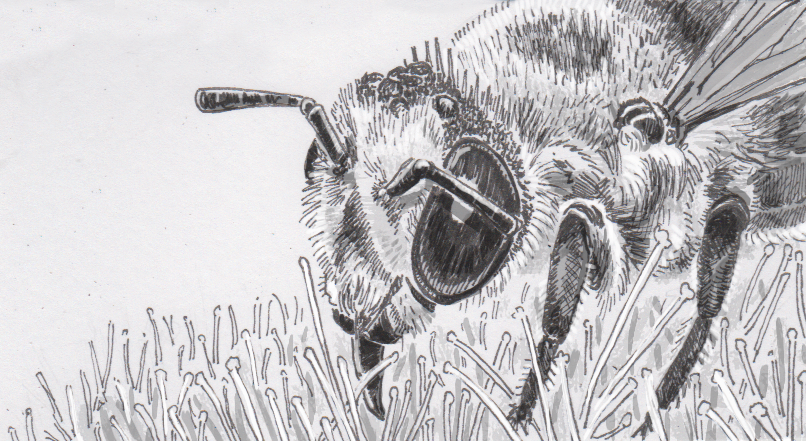 My daughter might be part honeybee. While her younger brother seems to think the best way to eat ice cream or candy is to gobble it up quickly, she figures the experience should be extended for as long as possible, even if that means licking a single Skittle for minutes at a time instead of just chewing it up in her mouth. Now, bees don’t necessarily ration our their enjoyment of nectar from flowers in quite this manner, but they do spend a lot more time than other insects slurping up the sugary liquid, eventually collecting more nectar and pollen as a result. While some of that nectar will need to be shared with their hive, the bees aren’t strictly being dutiful about their nectar collection— their mouths are actually adapted to help maximize their enjoyment of every sugary sip in a way my daughter would be envious of.

Like many foods that non-carnivores enjoy, the sugars in nectar activate specialized sensory cells on a bee’s proboscis, or mouth parts, which send a signal back to the brain. This usually coincides with a pleasurable release of neurotransmitters, providing positive feedback for acquiring some calorie-rich food. Over time, this response is diminished, presumably to make sure an animal doesn’t just burn out its taste buds by constantly soaking them in the first source of sugar it can find, which is why a tenth piece of candy might not feel as exciting to eat as the first.

Since bees are gathering nectar and pollen for more than their own consumption, evolution has set them up with an incentive to linger in flowers a bit longer than other insects. In addition to the sweet-sensitive taste receptors, they have secondary nerve cells that intermittently interrupt the process, causing the timer on their enjoyment to repeatedly reset. So by hitting restart on this process over and over, the bee is incentivized to suck up nectar for a longer period of time, maximizing each visit to a flower which can last as long as 10 seconds.

Aside from explaining what keeps bees on a particular flower for extended nectar-slurping sessions, this is also the first time scientists have ever seen taste-oriented nerve cells interact with each other, rather than simply pipe information straight to an animal’s brain.