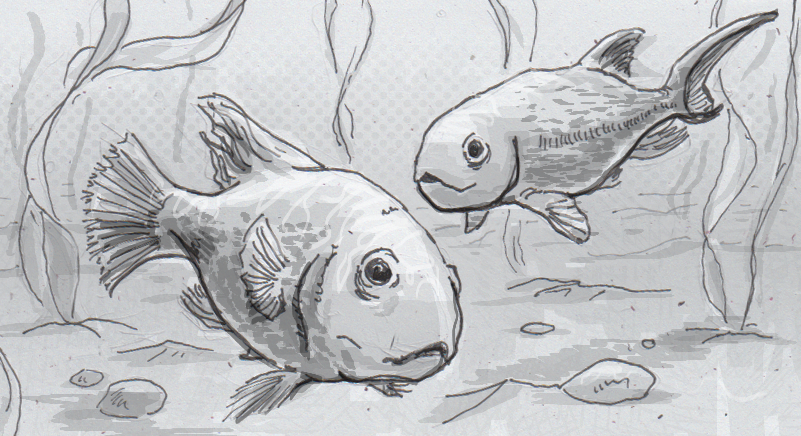 Around 600 years ago, goldfish were being bred in China to propagate a genetic mutation that gave them two tails. These mutations basically cause the fish to grow a branch in its spine, resulting in two copies of their normal tail, which is considered pretty in pet goldfish and maybe weird when encountered in the wild. Without human interest, these mutations probably wouldn’t go to far, although they also wouldn’t be the first time fish struggled to figure out how many tails they should have. Examination of 350-million-year-old fish have found that not only did fish evolve two tails, but they were even two types of tails, one of which can now be seen on land animals around the world.

Unlike the mutant goldfish mentioned above, the ancient fish in question weren’t swimming around two, competing tails hanging off the back of their bodies. As an adult, the Aetheretmon fish seemed to only have a single, asymmetric tail similar to those on modern sturgeon or paddlefish. These tails were relatively fleshy, and the top edge actually contained vertebrae, indicating that they were the evolutionary starting point for terrestrial tails from monkeys to lizards.

A recent reexamination of fossils of juvenile Aetheretmon fish complicated things though, as they displayed both the fleshy, limb-like tail that was prominent in adult fish, as well as structures for more fin-like tails you see on most fish today. As the fish aged, it seems that the fleshier tail absorbed the other one, but the fact that both tails grew separately reveals that tail evolution wasn’t the linear process we once assumed it was.

As just about any kind of embryo develops, it’s likely to grow structures that it inherited from more ancient blueprints, even if those bits of anatomy aren’t ever fully developed. Humans, for instance, have a short tail nub visible at around five-weeks-old that we later lose. Examinations of fish embryos had assumed that bonier tails seen in development were simply the remains of an original tail concept that would then be updated to match many fishes more fin-like tails you see today. However, the Aetheretmon tails indicate that finned and boned tails are actually independent lines of genes, and could technically coexist. When you look at a goldfish tail, or tails, today, you’re seeing the finned tail that these fish kept. Other animals that went to live on land apparently picked the other option, growing tails with bones instead.

At this point we’re learning of this evolutionary fork in the road through fossils, but it’s possible that analysis of genes may confirm it. Even when an animal no longer grows abandoned anatomy, their genes may still carry hints of what their ancestors’ DNA looked like, and what changes were necessary to get to where they are today.