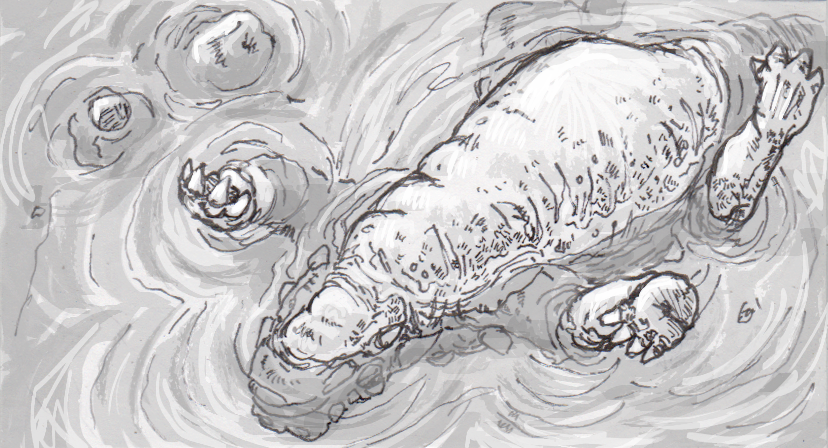 As jumbled, crunched and scattered fossils make clear, dinosaurs were not buried in an orderly fashion. Bones are often missing, broken or just separated from a body enough to give paleontologists a challenging puzzle to put them back in the same configuration and posture that they had in life. Some of the strange, contorted poses we find skeletons in actually make a lot of sense, such as the bent necks seen on many theropods. In other cases, there’s more of a mystery to be solved, such as why the hulking, armored dinosaurs known as ankylosaurs somehow managed to always get themselves buried upside-down.

The first step to unraveling this mystery to was to confirm if it really existed in the first place. Researchers needed to make sure that a couple of memorable anecdotes about upside-down ankylosaurs hadn’t skewed people’s perception of how common this kind of interment really was. So a short survey of ankylosaur excavations was conducted, looking at both the fossils and field notes concerning 36 different specimens. Sure enough, 26 of those dinosaurs were found laid out on their backs, showing that these animals were unusually likely to be buried upside-down.

Four hypotheses were developed then tested to see which seemed to be the most plausible explanation for this flipped dinosaurs. Well, they were mostly tested– one suggestion was that these particular dinosaurs were simply unusually clumsy, and did a great job of rolling onto their backs with no way to right themselves. There wasn’t really any evidence to support this idea, and it seemed unlikely that multiple species would have survived as long as they did if something so trivial could lead to their deaths. So option one was essentially discounted from the start.

The second hypothesis was that the upside-down ankylosaurs had been flipped by hungry predators. Since their backs were so well protected by bony plates and bumps, called osteoderms, this model suggested that predators could only eat the ankylosaurs’ relatively soft bellies. This kind of activity would presumably be a bit destructive though, and only one specimen out of the 26 was found to have a tooth mark on it. Unless predators were eating ankylosaurs with a very sharp straw, the fossils just didn’t carry signs of damage from other dinosaurs.

Turned over by tummies

If the ankylosaurs were apparently dying peacefully, the focus then looked at the process of decomposition itself. As a body begins to break down, microbes in the stomach can cause it to inflate with gas, leading to bloating in the abdominal cavity. With such a tough, rigid back, a swollen abdomen might push the dead animals off their feet, rolling them over before they were buried and later fossilized. Without any trace fossils of bloated bellies documenting this kind of deformation, researchers looked for analogs in living animals to see if this kind of decomposition was possible in the first place.

While rhinos are large, tough herbivores, they don’t have the right body structure to act as a proxy for ankylosaur death. Instead, researchers looked to armored armadillos, which were said to experience bloating and flipping after they died. Nearly 200 fresh carcasses were located and examined, but none of them were about to roll over as they rotted. A few were even brought to researchers own backyards to make sure they weren’t bothered by scavengers, but their stomachs just didn’t seem to be up to the task of being a post-mortem pneumatic jack.

Whirled in the waves

The final hypothesis involved bloating, but only in a much more mobilized corpse. This model required that the flipped ankylosaur be floating in water, making its top-heavy body much easier to rotate. Armadillos were spared the indignity of being thrown in the water, as researchers tested this idea with computer simulations to see if the weight distribution of various ankylosaur species was at all amenable to rolling over in a lake, river or ocean.

In these simulations, the ankylosaurs finally ended up on their backs. Dinosaurs from the nodosaurid family flipped at the slightest provocation in the water, as even a one-degree rotation could turn them over. Other ankylosaurs, like Ankylosaurus, were a bit less likely to capsize, but some bloating and a good nudge from a wave or predator could still leave them upside-down. What’s more, the sand and silt found at the bottom of many bodies of water would then be excellent material for fossilizing the body once it sank, further increasing the odds that we’d find flipped fossils millions of years later.

Source: Most ankylosaurs were fossilized belly up. Now, scientists think they know why by Matt Warren, Science