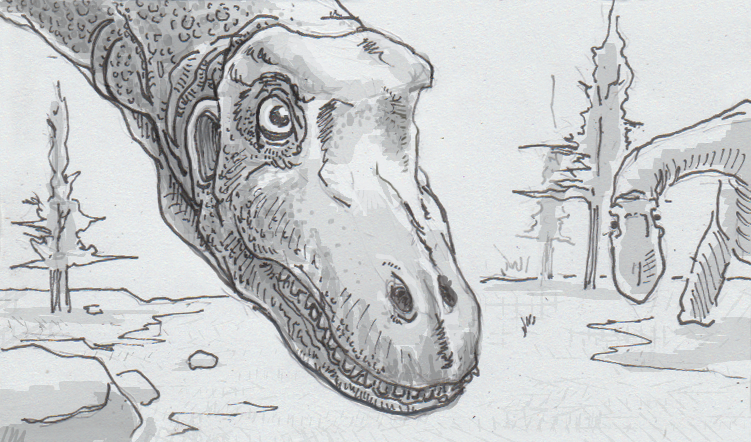 Unusual titanosaur saw a lot from its skewed perspective

One of the challenges of paleontology is figuring out what “normal” is. It’s hard to find the average size or shape of a species when you only have one specimen to look at, and that’s assuming you even have enough of that animal’s body to make judgement on in the first place. A new species of titanosaur, a group of long-necked herbivores from South America, definitely poses such a challenge with some of the weird features found in its skull. In fact, we know so few titanosaurs by their skulls that finding Sarmientosaurus musacchioi’s skull instead of a more robust thigh or rib is already making this a weird discovery.

Only a few heads of titanosaurian sauropods have been discovered, and so when researchers from the University of Patagonia found skull and accompanying vertebrae, they were maticulous in discoverying every detail it could offer. After excavating and airlifting the fossils, the team conducted CT scans on the bones, gathering enough detail to produce very accurate renderings and models. This allowed the team to not only consider the size and shape of the animals gross anatomy, but also the cavities that held its brain, eyes, inner ear and some preserved neck tendon.

The resulting animal would have been a bit odd. The first thing one might notice about S. musacchioi is how it held its head. The tendon and inner ears indicated that the dinosaur’s normal resting position was with its nose pointed down towards the ground, eliciting comparisons to Eeyore the donkey. It probably wasn’t looking at its toes though, as it had unusually large eyes for a titanosaur, as well as good hearing, tuned for low-frequency sounds, somewhat like an elephant. At a mere 40 feet long, S. musacchioi wasn’t the largest titanosaur in Argentina 95 million years ago, it may have needed to keep a more watchful eye out for predators than its larger kin like Argentinosaurus. It also only left room for a plum-sized brain, but it wouldn’t be the first sauropod to save space this way.

The skull showed a few other interesting differences from other titanosaurs, indicating that this species may have been holding on to more primitive features from earlier sauropods. Aside from stand-out features like eye-size, S. musacchioi carried features that generally matched the small heads, small teeth and high nasal bones of other titanosaurs. It’s of course hard to say how it carried itself, or if it had the osteoderms some relatives had, because unlike with those animals, we only have the head to work with. However, since titanosaurs seemed to enjoy a great amount of diversity in the Cretaceous, this new, droopy-faced family member may just be a bit weird, but not so abnormal it defies explanation.