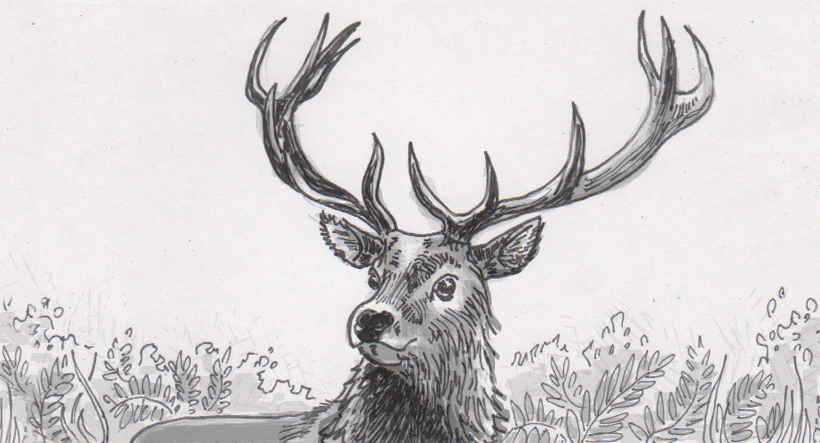 For all of the underlying biology we share with other animals, it’s hard to relate to antlers. They grow on heads, but they’re not hair. They’re not the cellular equivalent of fingernails that we find in rhino horns or porcupine quills. Instead, antlers are weird, bony growths that sprout anew every year, demonstrating just how much of a strain and specialization a body can go through in the name of sexual selection.

An antler starts growing on a deer’s head in early spring each year. Unlike the inert keratin that makes up your fingernails or hair, antlers are made of living cells, and grow inside a fuzzy layer of skin called “velvet.” As the antlers develop over the summer, it’s composed of active blood vessels, nerves and bone cells, all of which can grow up to three-quarters of an inch per day. Keeping this tissue alive isn’t free though, and deer will often have to strip nutrients from other anatomy to keep their growth on track. On top of everything else, it’s an investment that deer make annually, as unlike the horns of rams or rhinos, antlers are shed every year.

Theoretically, it’s all worth it though. Deer courtship places a lot of emphasis on antlers both as display structures and weapons. Male deer will butt heads and lock antlers to demonstrate their fitness. Like other famous bits of animal anatomy, bigger antlers help attract and impress mates while staving off potential challengers.

There’s a limit to all that “fitness” though, and studies have found that sporting the biggest rack is not always the most winning reproductive strategy. The increased metabolic demands and risks associated with bigger antlers seems to have given rise to a more subtle population of deer that get by just fine with more modestly-sized head ornaments. The assumption is that smaller antlers are just big enough to catch a mate’s eye without demanding too much upkeep. The fact that they’re less likely to get caught on a tree branch may also help keep their owner alive to try to mate again another year.

This isn’t meant to diminish how impressive these head-bones are though. Regardless of an antler’s size, scientists have been studying their cellular properties that let them grow so quickly while also being so resilient. The fibrous structures that compose the bone grow in a staggered pattern that helps them stand up to stress without being damaged. Antlers have been transplanted to other body parts, and even other animals like a mouse, and they keep growing like they were still on a deer’s noggin. Scientists aren’t looking to affix spikes to people’s heads exactly, but the fact that nerves can grow so quickly in an antler may be a model for human therapeutics some day.

My third grader asked: Do only boy deer grow antlers?

Outside of some unusual anomalies, its fair to say that antlers are a male appendage in just about every species of deer. The notable exception is reindeer, as both male and females grow antlers each year. It’s thought that the antlers help females claim territory that might hold precious bits of food. Coupled with a scarcity of predators on the tundra that the deer would need to hide from, it seems that having antlers ends up being a good thing for each and every reindeer.