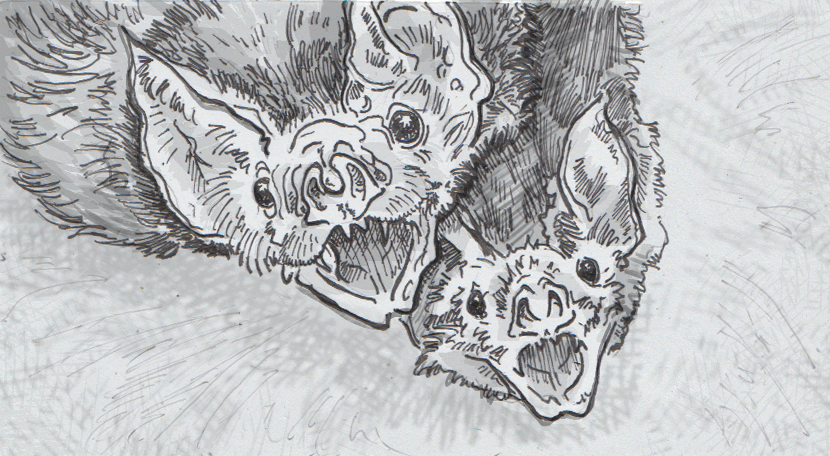 My three-year-old would do terribly in a vampire bat colony. Not only is he the wrong sex to be included in a female-driven community, but he’s also not too great at sharing (yet!) Vampire bats, on the other hand, rely on their neighbors, not just relatives, to assist not only with keeping track of their kids, but even scraping together a snack when one bat is out of luck. A regurgitated, bloody snack. Yum!

Vampire bats (Desmodus rotundus) need to manage their diets carefully. They’ve evolved fangs sharp enough to allow them to draw blood from prey without doing any permanent damage (outside of transmitted diseases.) This way, they can revisit sources of food more than once. This pairs well with their fast metabolisms, which require that they not go more than 48 hours without food, something not true of all predators.

If a bat’s favorite goat or pig is somehow unavailable, she can turn to her friends in the colony. For a long time, scientists have known that other members of the group will regurgitate and share some of their food with a hungry friend, although the details of how those decisions are made were murky. More recent studies that were able to closely track hundreds of interactions found that these relationships follow some of the social rules humans would expect of each other. For example, a bat is more likely to cough up some chow for a bat who has fed her in the past. If a bat can’t feed a friend one night due to a lack of reserves, she’ll likely share even more with that friend the next time she’s asked.

As intuitive as these interactions may seem to us (well, those of us over age three), they’re actually pretty complex. To keep internal tabs on who has shared food with who, the bats need to have pretty good memories, since those dynamic relationships branch in many directions on any given night. They also point to some degree of long-term planning. Even if the bats aren’t conscious of such decisions, this behavior shows that they’re sharing for their long-term benefit, since by sharing precious nutrition in the short-term, they’re theoretically setting themselves up for food from a reciprocating friend down the line. While we don’t often think of bats as being loyal or brainy, researchers are comparing this system to some of the social structures of elephants for its sophistication.

The next question in this line of research is then to figure out how a bat learns to share this way. Is it ingrained in the animals’ genes, or are they learning it from their parents? If it’s the latter, parents of toddlers would certainly be excited to hear the vampire bats’ tips on this topic.